As I wrote in the introduction to my post Thor: Movie vs. Myth was the topic given to me by The Extremis Review to see if my writing is good enough for them.
What can I say?

As of today I am officially in the roster for The Extremis Review. 🙂

On a monthly basis I will be providing a short post to a given topic, though I am also able to make suggestions as to what I would like to write about. My first post is due at the end of May, so you will have to continue reading my work here for now, until a post of mine will be published there.
Before you start wondering: Yes, I decided to use both my usual nickname (PoiSonPaiNter) and my Jesterdeer (my avatar that looks like a donkey with a jester-hat, yet calling it Jesterdonkey sounds stupid), even though everyone else uses a name that at least sounds like it could be a real one; but I already mentioned why I prefer the nickname.
I’m curious which topics I will be able to cover and what their readers will think of my contributions. Though probably the hardest thing for me will be the word count as my posts are supposed to be around 500 words and as you might have noticed I am rarely able to keep things short, even though I did have a few goes at it recently.
Anyway, I’m looking forward to this new challenge and am now off to rest a bit before Walpurgis Night tomorrow. 🙂
PoiSonPaiNter

or Merry Christmas as you would say in English. Alternatively I could wish you many other things for all those other holidays that are celebrated around this time of the year, but I stick with this one today.
A few weeks ago I was asked by the Fairytale Traveler Christa Thompson to write a guest post about the Christmas traditions in Germany.
Between writing my Bachelor’s thesis, getting sick and my laptop deciding to bit its final farewell, I managed to write a bit about how Christmas is celebrated around here. You can find the full post on her website: Christmas Traditions in Germany.
Thanks to TheFairytaleTraveler again for publishing my post. 🙂 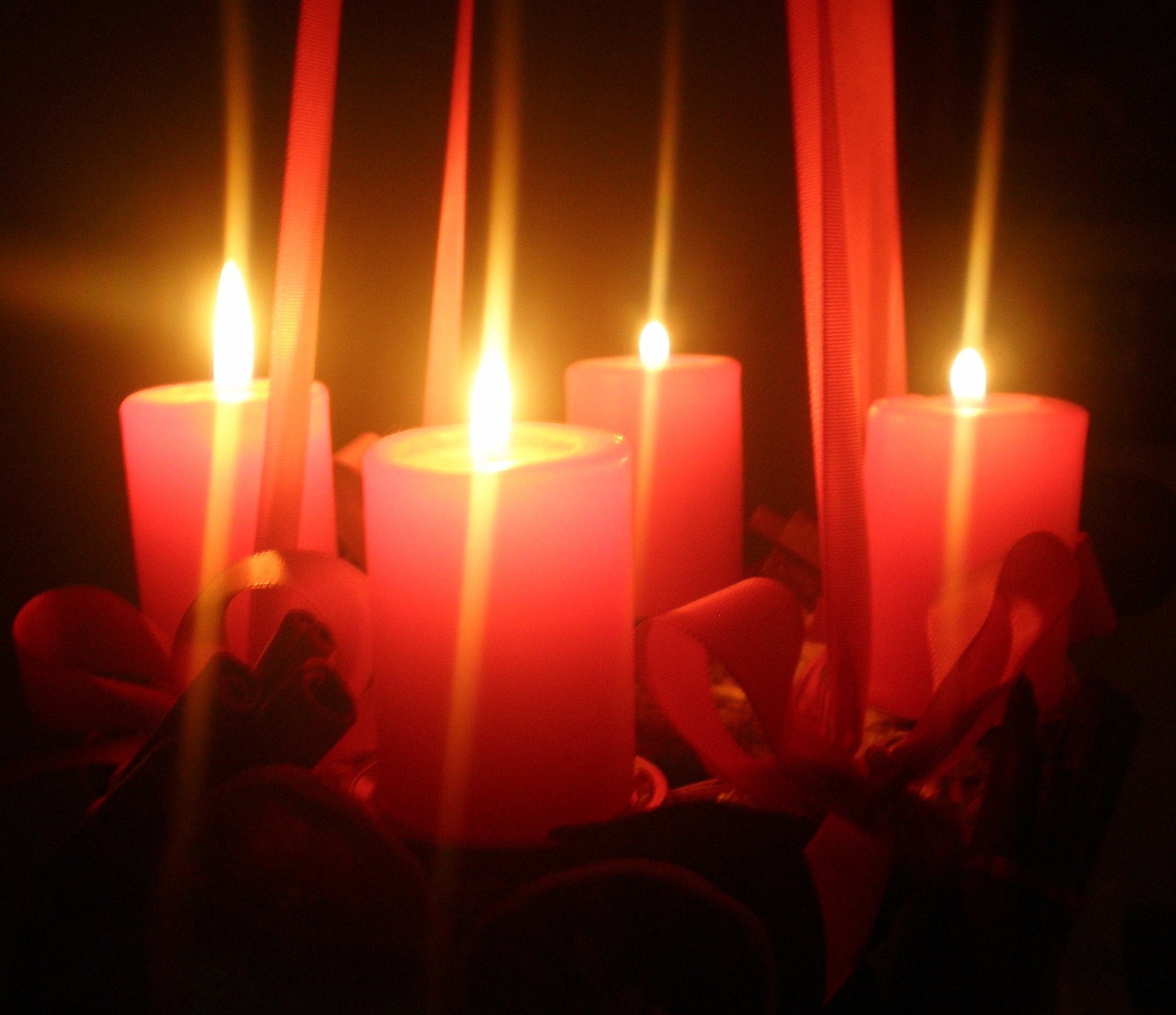 Adventskranz (by SolLuna from Wikimedia)

Christmas is a time for the family to get together, a time of light and a time of wonder. Experiences you gain from your childhood sip into your adult life. For a long time now Santa Claus is just a man in a suit for me, but I still think it’s great that children do believe in this being, this guardian of wonders (A few weeks ago I reflected on my experiences on this Guardian of Childhood).
The lights that shines through the streets at this time of year. The candles that are lighted in the rooms. The Christmas pyramids turning their wheels and creating magical picture on the ceiling. It all has something special, something unique, that isn’t quite the same at any other time of the year. In short you could say: Halloween is fascinating for me because of the darkness surrounding it, Christmas because of its lights.

Also the Christmas markets that you can spend hours at with friends and families. Drinking Glühwein (hot spiced wine), eating Mutzen or roasted almonds. If you pass through a market on an every day basis like I have to with the Weberglockenmarkt in Neubrandenburg you could think you’d become tired of it, but it’s different. If you go there in private the atmosphere becomes different than just going there for lunch or passing through. I can’t explain why, but it just is that way and I don’t mind. This way a Christmas market can still be nice even though you’ve been at it several times.
So far I haven’t been at that many different markets. The most times I was at the ones in Neubrandenburg and Greifswald.
And only this year did I read the story behind the name of the Weberglockenmarkt, which is quite interesting as I might add

In a cold winter night a weaver (Weber) made his way home to Neubrandenburg, home to his family for Christmas. Shortly before he reached his destination he ended up in a horrible snow storm. The storm was that bad that he could not see where he was going. Whether he was coming closer to the city or straying further away.
For hours he wandered through the snowy forests until he heard the bells (Glocken) of the St. Marien church. The sound of those bells finally helping him to find his way or he would have frozen outside the gates of his home town.
In his memory the bells ring throughout Christmas and the market (Markt) gained its name.
(Read the full story in German here: Weberglockengeschichte)

Greifswald was always closer to my home town than Neubrandenburg. But it is a quite charming one with occasionally a Ferris Wheel that allows you to look high above the city, an area for children with booths were different Fairy Tales are portrayed and just a nice atmosphere in the more historic part of the city.
One time visits include Schwerin, Berlin (Gendarmenmarkt) and a small one in Hamburg and passing through the one in Elmshorn.
Schwerin was in my school time when we made a visit to the art museum and finished the trip with a stroll over the market. I can’t really remember it any more though.
The Gendarmenmarkt is a smaller and secluded market in Berlin where you even have to pay a small entrance fee. When I was there with Conan and Plusquamperfekt from The Forum and a childhood friend of mine, several years ago, it was just 1 Euro (as I just found the ticket in a book I try to finish until the 31st). It was also quite full. Full of people and full of interesting (and quite expensive) self made goods. It still had a nice atmosphere for chatting about projects and Fantasy stuff.
I can’t remember which one we visited in Hamburg, but it was only a small one we had chosen for the Christmas staff party for the Eventteam (a small student project team for creating events for the students). It still was a great evening with some former, some current and new members of the team and a nice market.
I would like to see a couple of more markets in the future, even some bigger ones. They, however, have so many attendees that it’s far more stressful than fun and maybe not worth the trouble.
Even though there is much good done throughout the season for my family it unfortunately is also a time of mourning.
It was this day, five years ago that my grandfather passed away.
The first passing I consciously experienced within the direct family and it is still a sad memory. He will always be dearly remembered. Christmas time is a time to remember after all.
To remember what we have, what he have lost and to decide where we can go from there.
With this I wish you all a Merry Christmas and hope you will have some quiet time with your loved ones.
PoiSonPaiNter