I think it’s time to talk a bit about comics again, it’s been a while. As I said before is Hiveworks a treasure trove for great comics and I’d like to introduce you to these two relatively new titles.
I’m not entirely sure why I chose the spooky theme for this though. Maybe it’s because I recently finished reading The Sandman; maybe it’s because I’m already contemplating a Halloween-vacation to Ireland again; maybe it’s because I’ve drafted a sequel to Winter Moon and am thinking about expanding it further; maybe it’s because both comics are seemingly at a tipping point for the narration into something quite interesting; maybe it’s just because I want to write about them.
Take your pick and enjoy the read. 😉

This comic literally starts with something that goes bump in the night, so it was kind of also the inspiration for the title.
Black Grass tells the story of Reverent Abel Ruby (front) who besides being a preacher is also a medium (according to the description is he also clairvoyant, but that hasn’t appeared yet) and therefore able to interact with ghosts. One ghost in particular – Blue Valentine (back) gets him into a rather sticky situation involving hellish bureaucracy…
What drew me to this comic was pretty much the whole idea of a preacher-medium and I’m certain that DarkFairy’s Coelestin is entirely to blame for this – and I made sure to tell her about it when I discovered the comic (back in May last year apparently o.O) – even if he so far only had to deal with celestial poultry. 😀
Anyway, with close to a 100 pages it’s easy to catch up with this one – and hard to write about it without giving too much away, especially as the narration is quite fluid and fast. The characters are great and lovely and definitely not what you’d expect at first glance, especially Rejean seems to have a few more tricks up their sleeves that I’m quite looking forward to see…
I also really like the art style, the play with colours (especially when including the neon ones) and the way the different characters (humans, ghosts, demons) are designed. It balances well between light hearted humour and serious topics (death, duh) and I’m really curious where the story will lead. 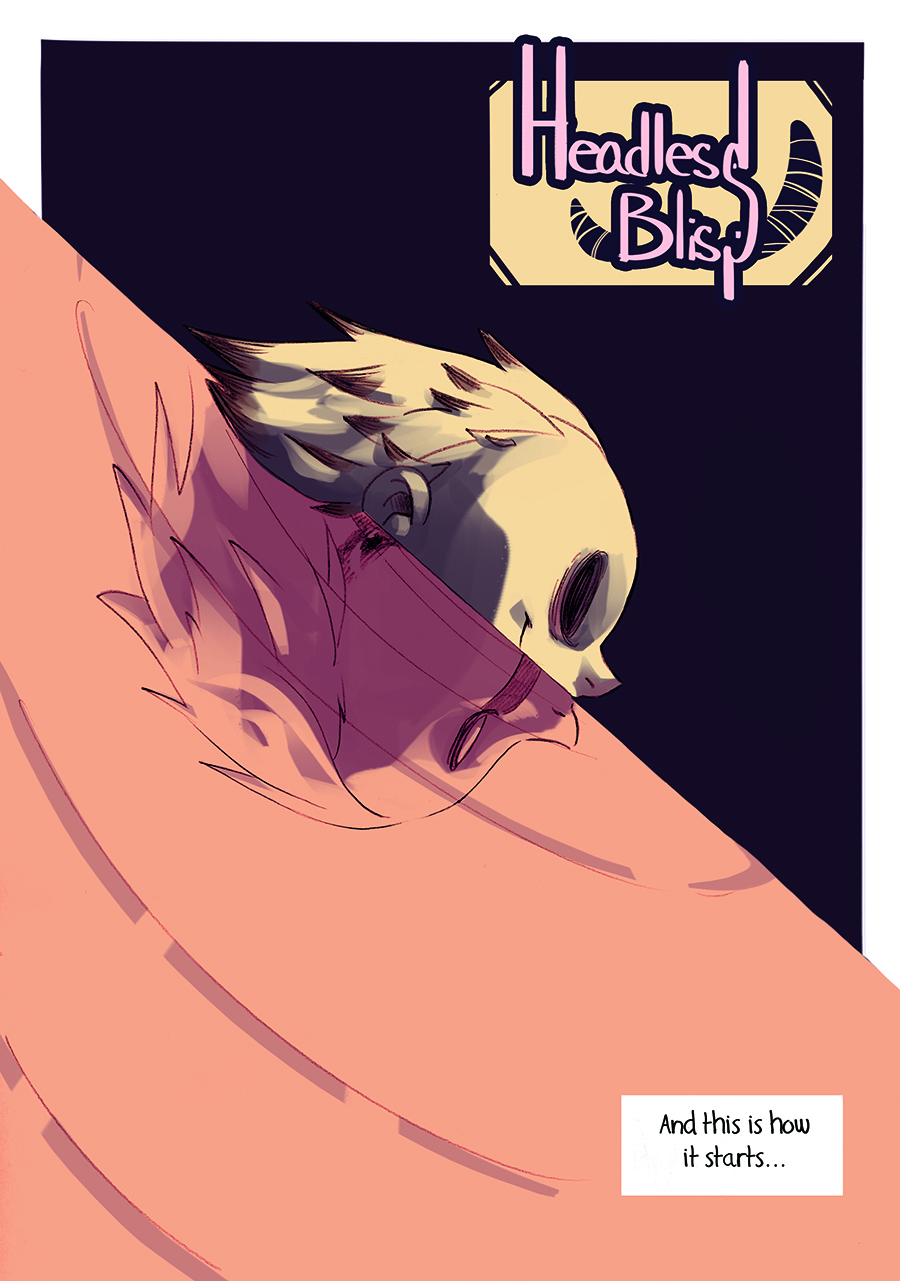 Headless Bliss by Chloé C in turn has a more adult air about it. It deals with nightmares, demons, cannibalism, but most of all: stories; or rather: What happens to the stories a writer abandons?
The Comic tells the story of Sinaj an incomplete story, created by a human, that tries to find meaning in her existence. On her way she encounters demon princess Annùn and the two of them become quite unusual friends. When Annùn’s mother Diov throws a human, that carries around the head of its twin (see picture), into the celebratory battle for her daughter things start going from bad to worse…

With a combination of an intriguing and intentionally „ugly“ (read not clean cut, but wobbly, weird and horrific) drawing style (befitting the genre) and interesting story telling, world building and characters this comic makes for a great read, even if some scenes are quite gruesome and disturbing (especially the tale of the Twins). It’s definitely not for for the faint hearted…
The story telling aspect itself is well interwoven in between the struggles of and between the characters and underlined with fascinating usage of movement without using panels and different kinds of narrative styles. One of the background stories is even told as another characters‘ weird dreams and as someone who also has veeery strange dreams that is something I can definitely relate to.
Interesting thing to know: It’s becoming more and more clear that this story has a larger connection to Chloé’s other work Go Get a Roomie, not just its creator. 😉

I hoped you enjoyed this little look into two great webcomics. 🙂
Have you read them?
Do you know others with similar themes?
Let me know in the comments below!
I know at least a couple of other comics with a similar theme, but on the one hand do I prefer focusing on two at a time with these things and on the the other hand do I think that they would work well enough on their own too.
So stay tuned for future updates.
PoiSonPaiNter

Well, let’s start this year with a new story that I came up with during the last weeks of December.
Some of the stuff described in it did actually happen, others not so much. I’ll let you know what is what afterwards. 😉
I quite like the idea and the story, even if I’m pretty sure I messed up some of the tenses, but read for yourself:

So, what do you think? Good? Bad? Interesting? Worthy to be continued?
Anyway, quick overview of what really happened:

And that’s it, everything else is entirely made up, I guess. 😉
I really like watching the full moon and pretty much every time I see one while I’m driving I think about werwolves and how inconvenient it would be to turn into one while sitting in a car – or at work in the stories case. Good thing I’m not one of them. 😀
Anyway, hoped you liked the story.
Happy Birthday to me
PoiSonPaiNter

Or at least I hope it will be happy and have lots of good stuff in store for everyone…
I mean after all that stuff happening in 2016, we are in for a treat, right?
Let’s do a headcount:
It was the first complete year with just Dad and me. Lots of ups and downs on that front, but that’s family for you. Still miss her a lot. Don’t think that’ll ever change.
It was the year the house I live in was renovated and my flat decided to take a bath. I still haven’t completely settled in again…
And of course it was the year that took away many incredible people and gave us some quite frightening things to look forward to. Though the people-part is arguable. With a celebrity-focused media like we have today it’s not really surprising that they talk about so many celebrities that have died this year, it’s what they do, but I’m fairly certain that before all this there would still be a time where the famous people you loved growing up or in your adulthood would still die at some point, because that’s life. It just wasn’t as broadly discussed as it is nowadays. Everyone knows the major players in popular culture, so of course we all have our own stories when they face their untimely demise. And with cancer and heart attacks being common disease spread across nations, why would they stop before people like them? Just saying…

But it wasn’t really that bad a year…

at least not for me.
I might only have been on one Concert (Van Canto as far as I can remember) and one Festival (Rockharz), but I’ve been to a couple of other just as interesting things.
I spent nearly two fascinating weeks in London with Janzy. A long overdue visit that couldn’t have been better. I’m pretty sure I’ll tell you about it one day.
I had a pretty fun (and exhausting) weekend of Convention-hopping with Schmusi and AnnaTao when we went from the German Comic Con Berlin to the TimeLash in Kassel (Review 2015) on the same weekend. I got to see James Marsters live in concert and panel and talk to two Doctors and Ace, so that was worth it. And we rounded the whole thing up with a visit to the incredible Wind Mill Museum in Gifhorn.
Two of my stories were good enough to be published on other sites (you’ve read about it during my Advent Calendar). A few others where published here and at DFPP Entertainment. A third story also won a minor writing competition again.
It was a great year for movies, Deadpool, Ghostbusters, Captain America: Civil War and Doctor Strange, to name a few, and I got to catch up with some other movies and series I haven’t had the chance of watching before. I also read more than my usual average of books and even dived into a few comics I haven’t read before.
I wrote a couple of often read posts including my review about Mara and the Firebringer and The Gamers that were (recently) shared by their creators, though the most read ones are still my old ones somehow…(apparently WordPress didn’t do statistics like they did the years before so I can’t link you to an overview here, sorry…)
I also helped fund different projects on Kickstarter, including Nichtlustig-cartoons, Attacking the Darkness post-production and JourneyQuest Season 3. For the latter two I also helped create the German subtitles, which was an interesting experience altogether. Oh, and I also got to coin the Orcish words for „whimper(ing)“ – bawulai(/-lon) and „war drum“ – sabatam (based on „Bawling Baby“ and Sabaton – the band – respectively). 😉 And helped a few artists on Patreon…
Anyway…

Honestly? I don’t know.
I want to to finally finish a few stories that have been lying around all year while I either finished other stuff or was not in the mood to write at all. There are also a few stories that have a basic outline that I want to complete for a different project to be published with three stories I already prepared for it last year (including The Quest for Ore and A new Day 😉 ) and of course many other story ideas that are still floating around in my head.
Last year (that still sounds weird…) I made good on my self-imposed schedule for a while but then dropped it again after a couple of weeks, so I guess I’ll give it another try at some point…
But right now I’ll enjoy my last vacation days and next week I might be celebrating my birthday (unfortunately not in Dublin at a Sabaton concert 🙁 ) with a couple of friends, we’ll see.

All the best for the New Year!