I’ve been following Eve Estelle since I participated (and won) her writing contest „Raven’s Omen„, recently she started another writing contest and for quite some time I wasn’t sure if I would find the time to participate – thanks to not having my usual drafting time.
But I did – even if it was a different process this time, as I wrote it directly in a document and not on paper first – and now you can read the resulting story, as I submit my entry. 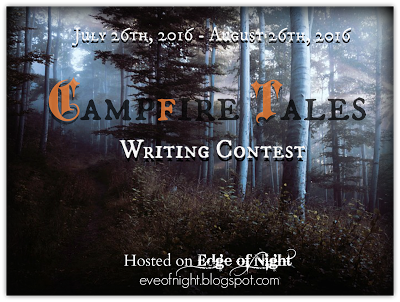 Trust can take years to build, and only seconds to shatter.

The group sat around a blazing camp fire and filled the forest with laughter.
“Do you remember when he –“, started one of the guys, barely able to talk, his arms‘ motion telling the rest of the sentence.
“Yeah, and then he –“, continued another in a similar fashion.
Their tales continued like this for a few more moments before they eventually settled down. The cracking of the fire and the leaves rustling in the wind were now the most prominent noises.
Grins and smiles still spread on everyone’s faces, the men each took a wooden stick from small piles lying beside them. The sharp cuts of the metal knifes on the wood soon became another background sound.
“I’m getting my blanket it’s getting chilly”, one of the women exclaimed, standing up from the toppled log she sat on.
“You’re sitting beside a huge fire and you’re cold. That’s so typically female!” One of the guys jested.
“Oh, shut up, Brian!” The offended woman retorted, glaring over her shoulder as she walked away to one of the small wooden houses.
“You know, it’s scientifically proven that the heat distribution in a female body –“, another guy chimed in from across the fire.
“Dude, spare me the lecture. It was a joke”, Brian interrupted him.
The other lifted his hands in defeat, not bothering to continue.

Finally finished with the sticks Brian ripped open a pack of marshmallows and put a few of them on the sharpened tip. Across from him his friends searched for something.
“I think they’re still in the car”, another woman declared and got up, patting her pockets.
“Roy, do you still have the keys?” She asked the man sitting beside Brian.
“Oh, yeah, sorry”, Roy replied, pulled them out of his pocket and threw them over the fire.
The woman easily caught them and went off to the parking lot. She rummaged through one of the cars for a moment, but returned empty handed.
“They’re not in there”, she announced when she got back.
“What’s not where?” The other woman, now sitting with a blanket around her shoulders asked.
“The sausages”, the other merely stated.
“Oh, I took them out when the guys lit the fire and put them by the sticks behind Ian”, the former informed her, waving towards their friend.
“Are you sure, Beverly? We just looked there”, Ian replied looking again.
“Yes. I’m certain”, Beverly assured.
“Maybe you just put them somewhere entirely different, wouldn’t be the first time you misplaced something”, Brian mocked her again.
“Very funny”, she just replied with a huff.
“I’m sorry Susan, I was sure I put them there, maybe I really put them somewhere else because I was distracted”, she apologized.
“It’s okay sweetheart, I’m sure we’ll find them when we break camp tomorrow”, her friend assured her.
“Yeah, but that leaves us with only marshmallows today”, Brian complained.
“Oh, suck it up, you had a good dinner back in town”, Roy silenced him this time.
“Yeah, but nothings better than a camp fire with marshmallows and sausages”, he still continued.
The others just shook their heads at their friend.

“It’s not unusual that things go missing in these woods”, a fourth man suddenly noted.
“How so?” Beverly wondered.
“There are said to be creatures that take whatever they desire from travellers. Food, trinkets, things like that.” He explained in a relatively bored tone.
“What, like Goblins or Kobolds?” Beverly now wanted to know.
“Oh come on, you can’t really believe such nonsense. You probably put them in your sleeping bag or something!” Brian exclaimed unconvinced.
“I could not tell. No one ever saw them and Brian is right, they’re just stories”, the other acknowledged looking away.
“I like stories like that. Please tell us, Julian. You’re from around here, so you have to know some of them. Maybe even some scary ones”, Beverly urged putting her hand on his.
“I don’t know. They’re really silly”, Julian declined.
“Come on, dude, camp fire without scary tales, that’s stupid”, Brian complained.
“And I’m sure the little Miss can handle it, if you hold her hand throughout it”, he added mockingly.
“You’re such a jerk”, Beverly complained, removing her hand from Julian’s and wrapping the blanket closer around herself.

“I’d like to hear a scary tale”, she assured Julian after a moment, a smile on her face.
Julian looked at the others and each in turn nodded their agreement.
“All right”, Julian gave in with a sigh and sat upright.
“This part of the forest used to belong to the Mayans and as they worshipped different jaguar deities it was not uncommon that packs of such animals would live nearby –“, he started.
“Aren’t jaguars solitary creatures?” Roy wondered out loud.
“Shush, Roy!” Beverly scolded him.
“No, he’s right. Jaguars usually live by themselves and the packs I mentioned aren’t really packs as such. They do not live together, but there are times when they get together to hunt.” Julian admitted.
“Really? I never heard something like that”, Ian now chimed in.
“Would you guys let him tell the story, maybe it’ll become clear why they’re so different?” Beverly scolded.
The two men looked down and she motioned for Julian to continue.
“Thank you. The packs that lived with the Mayans were indeed special. Some say they were trained and raised by the Mayans to protect their homes. Others say they were Mayans walking in the skin of a Jaguar, defending their people from threats –“
“You mean like werewolves?” Brian interrupted again.
“BRIAN!” Beverly yelled and he just lifted his arms.
“A bit, maybe” Julian merely accepted and continued “It is said that in the old days, when the Mayans were still at the height of their powers, no one in their right mind would dare to attack them. Especially not when the moon was full, like tonight.”
Julian paused to see if he had everyone’s attention and carried on in a hushed voice, as if he didn’t want anyone else to overhear their conversation: “In those nights, when the enemy was close they would not get an easy rest. The night around them would be silent, no night bird would sing, no animal stir. The wind would only bring them the rustling of the leaves, but they would feel that something was watching their every move. And then when midnight approached they would hear the growls –“
“Fuck!” exclaimed Brian as he hastily pulled the stick out of the fire, the smell of burned marshmallow rising from it.
A small grin could be seen on Julian’s face for a brief moment, the other’s sat in silence, not daring to disturb the quietness that was only broken by Brian’s low grumblings. When he was finished removing the marshmallow and putting on new ones, Julian went on.
“When midnight approached they would hear the growls, deep and menacing. Soon after the cries of their comrades would echo through the night until they found themselves screaming for their lives until the very last one of them was slain.” He paused again, letting this sink before adding: “Nowadays, without Mayans and real threats, it is said that the jaguar have to make do with what they get.”

The friends sat in silence once more, everyone looking across their shoulders into the bushes surrounding them. Brian was just about to comment something when a low growl came from the forest.
“It’s just a story, right, Julian?” Beverly asked, frightened.
She turned to him only to find two glowing, amber eyes looking back at her.
“Of course it is”, he assured her in a mocking tone, a sharp toothed grin on his face.

The screams of the friends could be heard from miles away, echoing through the forest until the early morning broke.

If my word count doesn’t deceive me I’ve met the maximum on the spot which I’m actually surprised about as I kind of noted down that it would be 1500 words and had to throw out about a hundred words. I rephrased things for that and scratched some things entirely, but I hope it’s still an interesting read.
Something I’m not entirely sure about is the „typically female“ in German we use the phrase „typisch Frau“ (or any other gender/job/etc.) to refer to something that is characteristically for a certain group of people and I tried to translate it and according to Leo.org that would be the proper translation. If anyone can confirm or deny it, please let me know.

The narrator is a bit different from the one I used for the other story – or use in general, but I intentionally tried to only let him make simple observations, as if he was sitting in the bushes watching them. 😉

I also think that I took some liberties with the prompt. The trust between Julian and the group might not be as deep as the trust between the other group members, but I do believe that you at least trust someone to a certain extent if you let them camp with you in the wilderness…

A curious thing: At some point I called the third guy Roy, but afterwards still used „the third guy“ not remembering it. Annoyed with doing that I had someone call him „Max“ later on, only to realize that I had already given him a name in the beginning of the tale when I edited it. >_<

Eve chose the winners and look what I got! 😀

You can read more about her decision here:

Tell me a tale

© Rights for the story lie with me. Do not use or repost without my permission.