Thanks to all the renovation troubles I’m not really able to read properly, so I decided it was time to do so again and what better way to use another Reading Night by Weltenwanderer? 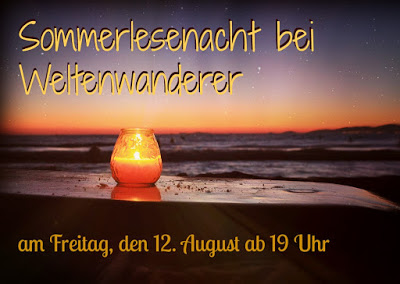 What is a Reading Night and how does it work?

It’s basically different people picking up a book to read during a set amount time.
If the invitation is sent from a Blog that usually involves answering question throughout the session.
In this case Aleshanee invited us to join in a reading from 7pm to 1pm on the 12th August 2016.
I answered the question that night on my Facebook (and subsequently Twitter) Page until 11 am and now you can find the collection of those answers and the missing ones here (All questions are obviously translated from their German version on Weltenwander).
Note: Everything in []-brackets is added/changed after the original posts.

Question 1: As you are participating in the ‪ReadingNight‬ today, I assume you’re not on vacation 😉 Where you away already or is it still planned for this year?
And which book accompanies you through the evening? Are you starting it or are you already in the middle of it and want to finish it?

I had my large vacation in March where [Janzy] and I visited and explored London for nearly two weeks. The other trip that was planned for September surrounding the Connichi was unfortunately postponed, so I don’t have any plans for further travelling (the exploring kind anyway) this year. (Non exploring travellings: Conventions and family trip)
I’m continuing with ‪NeilGaiman‬’s ‪‎The Sandman‬, so I’m not reading a book, but a comic – or rather comics[ as the Volume I chose consist of several chapters that were published separately].
I’m currently at Chapter 41, which is the beginning of Volume 7 (of 10) of the original run, so I want to finish this series, I guess.

Question 2: In which country or region does your ‪book‬ take place? Would you like to take a ‪vacation‬ there or would like to live there? Where would you most like to have your next vacation?

This ‪Sandman‬ story so far takes place in the different realms of the Endless, right now I’m in the Dreaming and I’m not entirely sure if I wanted to stay there for a prolonged period of time…

I mean what is shown of it is fascinating and there are quite a bunch of interesting people around, but suffering through Dreams mood swings? I’m not so sure that’d make it a good place for vacation…
In the real world there are a lot of places I’d like to visit. Currently I’d like to return to Ireland – especially for Halloween – , but that probably wont work, as I would[n’t] have anyone to take with me and travelling alone isn’t really my thing…

Question 3: By now you’ve gotten to know the characters in your ‪‎book‬ a little bit: Could you imagine to go on vacation with them? Are they likeable, like a buddy to through thick and thin with or would you not get along that well?

As I said before does Dream have a lot of mood swings. He’s fascinating, but he can also be extremely annoying, stubborn and even cruel. His little sister Delirium would probably drive me nuts with her babbling, it’s hard enough to follow her within the story.

So in both cases: Nope. I don’t think I’d like to go on a vacation with either of them – and I pity the poor driver Ruby, who currently is travelling with them, not only because I think she’ll die on one of the next pages (as I think I spoilered myself earlier…)…

Question 4: Where was your best vacation so far? Are there any funny anecdotes you could tell us about it?
If you spontaneously could go on a vacation tomorrow: Which three books would you definitely take to read?

All of my vacations had something special, so I can’t really decide which one of them was the best, but I can give you a look at some funny things that happened during some of my travels: Of Angel Chicken Wings and other oddities

I don’t know which books I’d pick, it usually depends on the vacation and my mood, but I mostly only take short ones with me as I rarely read while I’m travelling anyway.
The last time I went away I took „Am Anfang war die Kuh“ (In the Beginning was the Cow) by Fritz Steinbock – an anthology of short stories and poems about North Mythology – and a book with Russian folk tales in both Russian and German with me, but I didn’t read either.

Question 5: Do you like the ‪‎book‬ so far? Is it exciting, romantic, funny? Is it like you expected it to be?
Describe it with 5 nouns or a great quote, that you found!

I enjoy the tale that is told in the ‪‎Sandman‬ volume „Brief Lives“. It twists and it turns and the journey is interesting to follow. It’s kind of the way I expected, as this is already the seventh volume of the series and I kind of have a feeling of what it might be like to read it, but it’s still different every time around.

There were a few interesting things said by Dream or one of his siblings, but I couldn’t pick one in particular, so I’ll have to figure out five nouns…
Dream, Delirium, Destruction, Search, Siblings would probably be the easiest choices and as my mind is slowly drifting off into sleep-mode I’ll keep it at that. 😀
[Shortly before Question 6 was asked I finished the volume and decided to call it a day, with getting up at around 6am it had been a long one. So everything after this is answered retroactively.]

Question 6: Do you like the cover of your current book? Is the cover important to you or do you not care about it when buying a book? 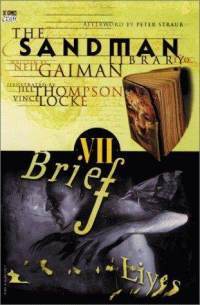 I’m not quite sure I like any of the covers (chapter covers included) of the Sandman-series. They are strange and weird and I don’t know, chaotic and definitely different to what is usually used. They just don’t go for appealing the audience. At the same time are they fascinating and filled with all the things happening within the Chapter(s).
I don’t think I would have even picked them up if I hadn’t known the series to be by Gaiman and said to be one of his best works.
As for the other part of the question: I’d like to just forward you to my answer from last time with this quote:

It depends.
If I look for a certain book then it doesn’t matter.
If I’m just browsing through the book store my attention occasionally gets caught by a cover. If the blurb then fits what I like to read, it is highly likely that I will take the book with me. If not it’s just put back where I found it.

Finale: Sooo, some of you made it this far, but now I’m quite tired I have to admit… The conclusion of the evening: Did you enjoy the Reading Night, where the questions all right, did you manage to read even a little? Did you reach your goal and would you recommend your book?

As I’ve said, did I not manage to get this far, but I did manage to reach my goal in finishing the Volume.
I’d recommend the whole Sandman series, it might sound like a broken record as everyone is saying this, but it certainly is one of the must reads.
It has some very fascinating and interesting story lines, characters and worlds. The drawings might not be what is generally depicted as beautiful, but they’re certainly unique. The way the characters are shown feels almost like reading a story board that only waits for some director to pick it up and turn it into something amazing. 😉
The questions were interesting and even if the cover-question was a repetition do I think it’s a nice addition on such a night.
A great thank  you to Aleshanee for hosting this one again!

I’m not sure when I’ll continue with the series – or reading in general, but I certainly will.
As I noticed yesterday did Feuerflügel participate as well, so feel free to check out her post about reading Stephen King’s The Dark Tower (that I still have to get too…  >_<)
Have you ever participated in a Reading Night?
Would you like to?
Let me know, maybe one day I’ll host one myself. 🙂
PoiSonPaiNter
© For the cover belongs to its rightful owner.