As fourth part of the Nerd-Week I present to you a review for Knights of Badassdom. You can’t compare it to Mara, but it’s nerdy, so it fits the theme. 😉

I first heard about this movie when we watched the Wacken 3D movie in the cinema and they showed the quite epic trailer. Still, our local cinema did not even play it, so we couldn’t watch it on the big screen.

Last year, when I was in Cologne with Unmei for our visit to the Harry Potter Exhibition we had some time to kill and spent that – amongst other places – in an electronic retailer where my eyes fell upon the DVD and I couldn’t resist taking it with me. 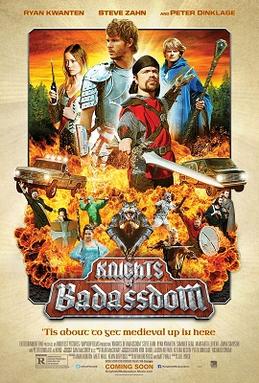 Joe just broke up with his girlfriend so his friends Eric and Hung decide to kidnap him and bring him to the LARP-battle Fields of Evermore. The newbie LARPer is at first utterly unable to cope, but upon seeing female LARPer Gwen and hearing what would be in store for him, he at least decides to give it a try. When Eric tries a ritual on Joe in his attempt to finally level up his character and uses a real spell book, instead of the in-game ones, he ends up summoning a Succubus from hell.

While watching I was torn between laughing, trying not to think too much into what was happening and wondering what the hell was going on…
Fast cuts make it hard to follow the Demons‘ activities at times, jumps between rarely introduced characters don’t really help either.

This movie plays a lot with stereotypes, but in a fun and not insulting way and that’s refreshing. It also comes along with a pretty cool soundtrack – if you like Rock/Metal – and a quite epic boss battle …

Still, I feel the need to mention: Watch with care if you’re not a fan of splatter, as a lot of people get torn to shreds throughout the movie.
I don’t mind that kind of stuff (heck, I went for Pizza after District 9 …), but some things were quite disgusting.

As it is common with Horror movies there is not much time spent on actual character development. They are introduced and someone rises up to the challenge of defeating the big bad. In the context of this movie that’s not a bad thing, as it does focus more on the jokes and action.

Seeing as this is a movie about LARPer/LARPing you also get a look at different types of characters within the game, but the focus soon diverts from that and you rarely get any nods to their in-game characters.

Though it still felt as if every character had something unique about them. Everyone is enthusiastic about the world of Evermore in their own way. Though describing them more would take away the fun of getting to know them through the movie.

Please don’t take this movie serious, I’m not sure it even does so itself.

It’s fun to watch and has some quite good gags and as I said the soundtrack is pretty cool, but that’s about it.

The storyline, while different and probably innovative, isn’t really followed through as it is buried in crude jokes, splatter and male fantasies.

Don’t get me wrong, I did enjoy the movie as a whole and it’s a great way to shine some much needed light onto a much disregarded sub-culture, but you simply shouldn’t focus on the little things, because then it gets pretty frustrating.
And to be honest: Supernatural’s Larp and the Real Girl did a pretty good job at portraying a similar storyline without those things mentioned above…
(Or if you are more a fan of Pen&Paper make sure to check out Zombie Orpheus Entertainment/Dead Gentlemen Production’s The Gamers movies, where the whole „stay-in-character“-thing is used way more often and in quite hilarious ways)

Apparently the version that got released was not the one the director Joe Lynch created, but a re-cut from Wade Bradley, after internal differences. So maybe that’s why it had those issues I mentioned. Unfortunately can I only give an opinion for this version and don’t know what the difference between them is…
So, simply see for yourself if you like or dislike this version.

© For the poster belongs to its rightful owner.