or Samhain or whatever other holiday you are celebrating today.

Halloween or All Hallows‘ Eve is a Christianized feast to remember the dead, based on the traditional Celtic Samhain, that was also thanking for the harvest.
Many tales and traditions entwine around this holiday, such as:

But I don’t really want to cover that part, far too many other people have already done that. 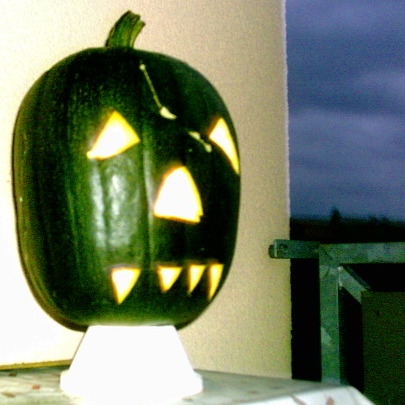 One of my very first pumpkins…

Halloween for me is special because we do not really celebrate it in Germany. Roughly 10-20 years ago, no one even knew about it. Depending on which Federal State you are in you even celebrate other things on the 31. October (and the 1. November).
In the Lutheran regions the 31.10. is called the Reformation Day, a day to remember Martin Luther nailing his 95 Theses at the church door in Wittenberg. In my region/state this is considered a civic holiday. Whereas the Catholic regions have the 1.11. (All Saint’s Day) and other’s – like the state I studied in – have neither.
So I grew up with the knowledge of the 31. being the Reformation Day.

When I was about 8 or 9 I first heard about Halloween.
Back then we had evening projects in Primary School and one of them was lead by a woman that had moved to our small town from America. She told us about several things like the language, muffins, traditions and of course: Halloween.
And it then made sense to me why they played spooky cartoons on Reformation Day. 😉
We even had a costume party back then and I remember going as vampire, with a sliced black plastic bag as cape and tediously sought black clothes (back then my wardrobe was a bit more colourful than it is today…) and ridiculous face paint. 😀
That year we also went Trick-or-Treating (as ghost-thingies), but the majority of people around us didn’t really know what that was about, so we had to explain it over and over again. As a result we skipped the Trick-part when they weren’t prepared. By now people know that kids walk around on this day asking for sweets, but they are rarely in costume and, especially the boys, prefer Tricks to Treating….It’s a pity, but I can’t change that.
For a few years my father also grew pumpkins in our garden, so I’d be able to carve them around Halloween. He doesn’t do it anymore as I was barely around the last few years, but it was always fun to create the scary faces – even though they looked never as great as some others do. 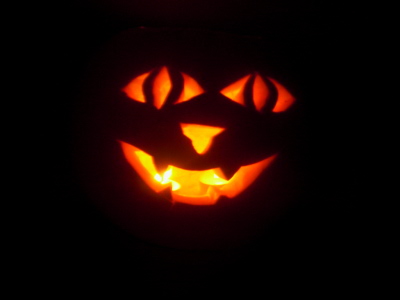 One of my wolve-themed pumpkins…

What also is different in Germany is that there are rarely any Haunted Houses.
There is also not that much decoration in the houses. In Kölln-Reisiek a village or small town close to where I studied is a family that turns their house into a Haunted Mansion every year, it’s only small but somewhat cute. But really large ones? Not that I know of. You have The Dungeon in Hamburg, but that’s not really the same as you can go there throughout the whole year.

Apart from the fact that you are able to buy costumes and sweets and everything, there is not that much celebration going on here and it is one of my goals to one day spent a Halloween in the U.S. and/or other places with Halloween/Samhain traditions to see how it is celebrated there at first hand.

What I like about Halloween is the spookiness that accompanies it. The lores, the legends and just the belief that the souls of the dead and other spirits have the chances to walk freely on earth (again) hold a great fascination for me. Though not just those that are specific for this holiday.
At the beginning of the month I discovered The Fairytale Traveler, a blog about journeys into regions of these things. For the whole October they introduced the people to A Monster a Day, which was pretty cool as I also learned new stories.

Apart from that there are also the Horror stories that accompany Halloween. I don’t mind a good scare, though by now I am more scared by psychological things than, supposedly scary looking creatures. Even though I do cringe at sudden revelations in movies. Occasionally I myself try to write scary stories, but they are more often than not just unfinished drafts. What I did finish is a story about the Owlman of Cornwall. A creature that is said to live in the woods of Mawna and occasionally appears before people. Some even connect him to the Mothman that appears shortly before a disaster. Anyway, if your German is good enough you might want to have a look into the story: Augen (Eyes).
Another story that is fitting for the occasion and rather young compared to the one above is about spirits that inhabit pumpkins and trick people. But I haven’t gotten around to typing it yet.

One of the Pumpkins I carved for the party.

But enough about stories, let’s get to the fun part of Halloween: The Halloween Party.
In my semi-adult years I never attended a fully fletched Halloween Party. I organized one for my college, but that wasn’t the same. Even though we decorated the cafeteria barely anyone dressed up or did actually do something remotely Halloween-ish. It was more like a normal party with decorations …

Another Halloween was spent at the Hammerfall concert in Hamburg I mentioned in my concert review from last year, which was pretty cool, yet strange to be there at that time of the year.
As the 31st is not a civic holiday in Schleswig-Holstein (where I studied) I was only able to go to the small Haunted Mansion I talked about earlier last year.
But this year will be a bit different.
I will be in Hamburg again and though we do not know what we’ll do at Halloween itself we (Black Kat, Iron Eve and me) will go to the Hellnights on the 1. November. A Horror punk concert-festival with The Other and other bands.
Or to put it into one of my much liked alliterations:
Halloween in Hamburg and Horrorpunk Hellnights in the Hafenklang.
(Just like Hammerfall in Hamburg on Halloween 😉 ).

I’m curious what will happen and wish you all a save journey through the spirit-filled night. 🙂