And another post that has nothing to do with the Fairy Tale Summer, but that I wanted to write because of its topic: „Me and Comics. How it all began. Blogparade.“ Booknapping and GeschichtenAgentin created this Blogparade for all those readers, who not just like the written word but also the picture accompanying them and that’s something I can talk about a lot (especially as Booknapping postponed the ending of the parade so I could still participate). 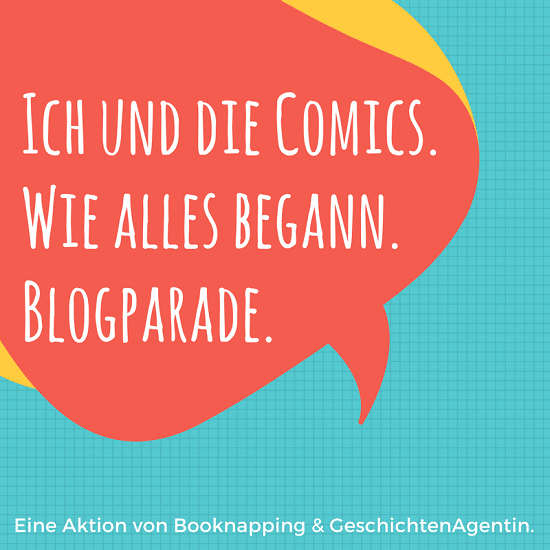 Let’s take a look at the beginning…

As you might know did I already talk about this, at least in terms of Webcomics, in my Introduction to Webcomics:

I can’t really remember how it happened, but I think that on one of my trips to the Book Store to buy a new Manga, I discovered a book-like collection of Comic Strips that I just had to look at.
But who wouldn’t do that with a bright red book that had a clown on the cover, who had just cut off his own leg with an axe, while its titled claimed the content of the “book” to be “Notfunny”?
I certainly couldn’t resist picking it up and I still do not regret that I did.

But that’s not entire beginning is it?

For as long as I remember did I enjoy reading the small comics and cartoons in newspapers and magazines. I never actually followed any series (except Bummi maybe, but that was more due to my mum buying it for me), but I read them whenever I got my hands on them. Still discovering that this is a thing took me a while.
When I was twelfth, I think, I got into Anime and wanted to read/collect the Manga they portrayed. I still remember that I would have had the chance to buy an entire set of the Dragonball Manga series at a flee market, but my grandpa and my mother argued against it, because it was too expensive and just some books with pictures. I kind of still regret giving in to them, but that didn’t keep me from collecting the series regardless, even if it was more expensive that way. 😉

As this was my first series – and I really liked both Anime – I also collected the magazine with new stories and additional info. Unfortunately did my mum (and I) decide that I don’t need them any more and gave them away. Still regret it, never found such a great time line of the Dragonball (Z) universe again, as the one in those magazines…

Anyway, this is about Comics not Manga (which even became a topic for my oral English exam during studying). 😉
Because of reasons I can’t remember I stopped reading for a while and didn’t care about my nerd stuff; which resulted in regretful sales. During my A-Levels I got back into it, mostly because of different Manga, but also because of Webcomics, which I told you about in the different parts of category I linked above – and will tell you more about when I get around to adding to the series.

Where did it go from there?

I think 2012 was the first time I ever was in a proper Comic book store and they’ve fascinated me ever since. Unfortunately there is only a small one in Rostock, but that ones mostly for card and table top games. The closest proper ones for me are in Lübeck or Berlin.
Since I’m able to go to (I prefer looking through stuff before buying, instead of just ordering it online) proper Comic book stores I’ve started to collect anthology albums of different series I like. Buffy for one thing, because I want to know how the series continues, but also mostly Marvel-stuff and I recently bought the first volume of Preacher.
For four years, I think, I’m attending the German Free Comic Book Day now and I always use it to fill up my (Manga) series and discover new things. I’m not really picky, if something sounds interesting and looks good I’ll check it out, though buying it might not be part of that equation. It’ll probably stay that way simply because I don’t want to go through the trouble of collecting old stuff, though I’d love to visit someone’s Comic library of complete Marvel volumes and spent a couple of days in there. Let me know if you’d be willing to let me. 😉

That is also why my book collection (and manga collection, simply because I chose to collect long series) is much larger than my Comic collection, counting physical volumes and bookmarks. But one thing is for sure (to quote the introduction again):

[Notfunny] was my entrance into the world of Comics and I haven’t started looking for the exit yet. Quite the opposite. Since I started using the Internet more frequently, I discovered many more Comics to enjoy.

And I certainly will continue to read and also write about the Webcomics I’m reading. 😉