As my mum and I will be staying a the Book Hotel this weekend did I spontaneously decide to declare this week „Book-Week„. With this I’ll try to finish the reviews I’ve accumulated so far, maybe this will help to shorten my To-Finish list a bit.
I was looking for something entirely different when I passed the reduced books in a store and the glittering cover of The Hunter’s Moon caught my attention. After reading the title (the translation of the German title would be „In the Shadow of the Elven moon“ – Im Schatten des Elfenmonds) I contemplated a moment if I should really pick it up, as Elves aren’t really my thing. Against my better judgement of already having far too many unread books did I have a look at the blurb and after reading so much about Ireland and its folklore over at Ed Mooney Photography and The Fairytale Traveler I simply couldn’t resist actually buying it and totally blame it on them.

Why is that? What is it about? 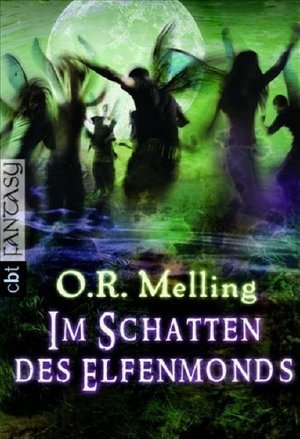 The Hunter’s Moon tells the story of Gwen and her Cousin that had planned on travelling the Emerald Isle for quite some time and are now finally on their way. Though nothing actually goes as planned when the Faerie folk gets involved and somewhat kidnap Findabhair.
Instead of being with her cousin Gwen now has to try to get her back from the Elves, hitch-hiking from one mythical place to the other, facing challenges and threats and meeting new allies along the way.

For some odd reason that I also blame on the aforementioned culprits did I start reading right away, I think even while I was waiting for the bus. If not, I started reading it as bus-literature the next day and finished it quite fast. Thanks to its fluent writing and nice short chapters was it easy to do that and be at a proper stop whenever my ride ended. (It annoys me if I have to stop a chapter right in the middle of a paragraph)
The thing that bugged me while reading was the language the girls used, though this might be due to the translation. They spoke in a tone that sounded so forcefully colloquial that it wasn’t fun reading their conversations. Though it did get better towards the end.
A thing that constantly confused me were the Irish words sprinkled into the sentences, but I’ll get to that later.

The main character is the sixteen year old Gwen (short for Gwenhyvar, I believe). A chubby, shy thing that has to overcome her fears to get to her cousin in time. Well, at least this set up sounded great in the beginning. Very soon these things weren’t really mentioned any more as if it only was used to establish that the girl is this way and then dropped because everyone she meets is sooo beyond judging her by physical appearance. Alternatively she thinned out quite a bit while running around looking for a ride to catch. Honestly, as someone who is quite fluffy and has experienced the looks and reactions one can get, this behaviour/change just sounds odd to me. I’ve heard of the hospitality of the Irish, but no reaction towards something that was supposed to burden her in the way it was described in the beginning makes this kind of strange. Of course she gains confidence throughout her journey, but it still happens too fast for my taste…
On the other hand is she quite gullible when it comes to the people she’s meeting and trusts them more or less instantly – which nearly got her killed a couple of times.
In short: I would have liked to smack her upside the head on more than one occasion.
Then there is Finabhair, whose name I always misread and mostly stopped reading it at the Fina. I’m not sure what I can write about her without sounding rude, but I guess I’m just really not a fan of strong females turning into lovesick dumbos. Even though she was annoying in the way she treated her cousin was her „I made the Faerie King fall in love with me and now I’m going to save his race“-attitude even more tiring.
Her beloved Finvara wasn’t better and it greatly bugged me when he still flirted with Gwen after being with Fin. But as we learned in the book: Faeries think differently about those things. They also have strange ways of stopping or supporting people but that seems to be based more on the folklore than on artistic license.
Just like Gwen her red headed helpers are also quite credulous and more than jumped at the chance to help the random girl they had only known for a couple of hours. If only half the people I come across were this loyal after our first meeting, I think I wouldn’t have so many trust issues. Nevertheless, they seemed more interesting than the actual main cast – well except the Island King, who rather soon fell into the „I barely know you, but I love you sooo much“-cliché.
Still, the whole „we only met shortly, but that’s enough for doing indescribable things for each other“ mind-set bugs me…

As a book about folklore it is really interesting to learn about these different mythical places as Melling certainly knows her way around it.
As a quest throughout Ireland-story it unfortunately felt a bit dull and rushed at times, with the most interesting aspect really being the insights into the Fae world and the finale.
It was still nice to read, but I don’t think I’ll continue with the other books of the The Chronicles of the Faerie – even though the fourth one sounds interesting.

It’s strange that the authoresses daughter has the same name as the character, but I don’t know if she either was just an inspiration or Finabhair was an actual self-insert for her.
As I have the habit of skipping to the end to read the last page I discovered, after I read a couple of chapters and felt slightly annoyed by not understanding the Irish phrases, that there is a glossary at the end of the book that explains them and some of the places. It showed the incredible knowledge Melling has about her home even more. What it also showed me is that I have know idea how to properly pronounce Irish words…I would have read so many of them so wrong…
I consider languages to be a fascinating topic, but I don’t like having stories with other languages within them and no explanation for their meaning. Therefore this glossary was quite helpful – if depressing, when it comes to my lack of understanding…
But the „worst“ result of reading this book is that the thought Ed and the Christa had implanted in my mind with their posts about the Island has gotten more footing.
Now my wish to travel to Ireland is slightly larger than to do the same with Scotland.
Not to mention that I’ve already looked for dates, flights, accommodations and a couple of other things for a possible visit later this year…
PoiSonPaiNter
© For the cover belongs to its rightful owner.