I know the movie was released some time ago in 2012, but as I already have a habit of posting stuff way later then when they happened, I thought I might as well write a bit about this as I just re-watched it and felt like sharing my thoughts.

I first read about the movie on the deviantArt page of the artist Johanne Matte (aka rufftoon) that was involved in its creation. To celebrate the release of the Trailer she posted a series of cartoons that introduced one of the characters she had been working on, a character that was only eyes in the shadows of a closet at first, but then fully visible in the conclusion when the trailer was finally out and he could take revenge on another character that had previously mocked him about not being allowed into the light – which was by the way Zhao from Avatar – The Last Airbender.
This in combination with the trailer made me curious about the movie. It looked like a fun family movie. As a result I asked Iron Eve if she wanted to accompany me into the cinema as soon as I knew when the movie would hit the German theaters.

But what’s the movie about? 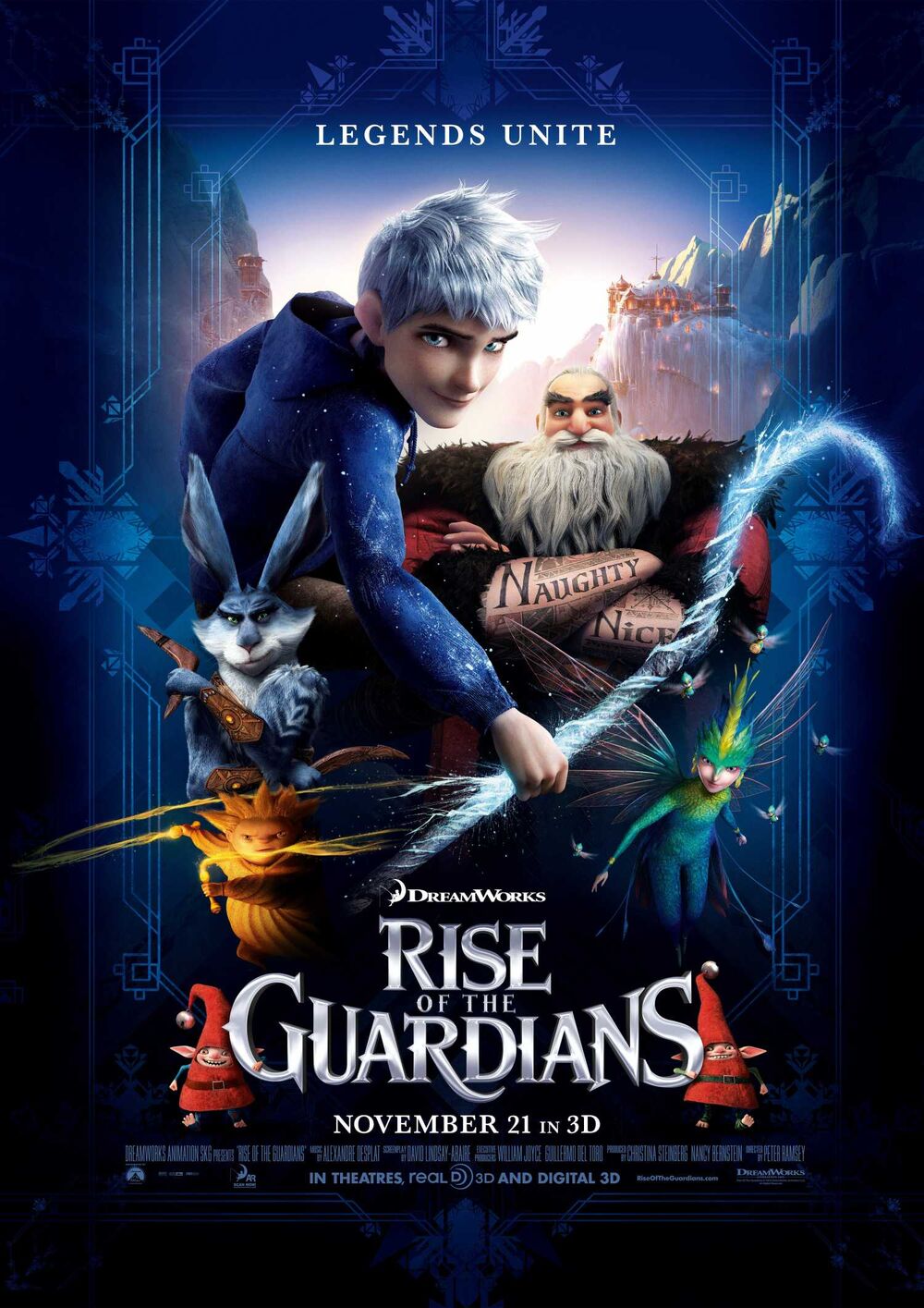 One of the official posters of the movie.

The Rise of the Guardians is an Animation Movie by Dreamworks Animation and is about the Guardians of Childhood: Santa Clause, the Easter Bunny, the Tooth Fairy and the Sandman protecting the children of Earth with a strong hand…wait…no, that last one was nearly a line from Avantasia’s song „The Tower„. Let’s try again: Those four were chosen by The Man in the Moon to protect the children from any danger. Each of them protecting a certain aspect of childhood: Dreams, Hopes, Memories and Wonders. But of course something does in fact endanger these things: The Fear created by the Bogeyman. He had been weakened over the centuries and now tries to regain the powers he had throughout the dark ages, because all mystical beings can only exist as long as people believe in them. And no one really believes in the Bogeyman anymore. Therefore – much to the dislike of the Guardians – he tries to make children believe in him through turning their dreams into nightmares and stopping their belief in the Guardians to weaken them instead. With the help of a newly appointed and still not so happy about it Guardian – Jack Frost – they try to fight off the new threat and protect the last believer, the boy Jamie, at all cost. But Jack first has to decide which side he choses, as no one ever truly believed in him before.

As I mentioned I watched the movie in the cinema for the first time and as it nowadays is a must-have to show everything in 3D it was also only shown as such.
I have to say I am not a fan of this trend. On the one hand it is pretty annoying to wear the 3D glasses above your actual glasses and on the other hand do 3D movies have the tendencies to either only include short sequences where it is nearly a waste to use it at all or use it in sequences that are that fast that you get dizzy while watching it. Well, at least we have a 3D-capable theater by now and did not have to watch the 3D material in a 2D cinema…(I had that when I watched „The Last Airbender“ and it made some scenes even worse…)
Instead of doing either of it RotG did use the 3D effects quite nicely for the dream- and the nightmare-sand and general movement and perspectives. I kind of think it makes more sense to use these effects in an already animated movie than in a real-people movie, where you can’t actually get the same experience.
Other than that was it also interesting to see when we laughed and when the actual children laughed about certain jokes. It is always fun to be in a children’s movie as a semi-adult. 😀
As we watched it in German we also had the German synchronization and I think it was quite well done, especially now that I’ve watched the original version. The voices are quite similar and even the translation was quite on spot. Though they did change the calling name of the Tooth Fairy from Tooth to Fairy (Fee), they probably just didn’t want the characters to shout „Zahn“ all the time. 😉
Other than that: North (Santa) also has the Russian accent, Bunnymund (Easterbunny) calls everyone a mate (though in the Berlin-way: „Keule“), Sandy (Sandman) doesn’t speak at all. Oh, and Pitch (Bogeyman) is voiced by Son Goku (Dragonball Z), but he can pull off the tragic villain as good as the universe savior. 😀
I really liked that Sandy communicated only through sand-pictures and the Baby-Tooths only through whistling instead of actual talking.

What I liked about the characters of this movie, is that all of them have enough quirks and antics to not seem as „perfect“ as protagonist in movies often tend to be. It is rare for me, but I don’t think that I really do NOT like any of the characters, especially none of the main cast. (I will probably cover this at some point in time with a separate post)
Maybe it’s because of these things:
North changes from childish to Warrior in seconds.
Bunny is the big and bossy Australian *cough* kangaroo *cough*, that can also be adorably cute.
Tooth is all business, but quite obsessive when it comes to teeth and children.
Sandy slightly silly, but the secret badass of the four.
Jack, the childish prankster that just wants to be seen.
Pitch, the „bad boy“ that just wants children to remember him.
And the kids, that are just kids being silly kids. 😀

As I already have a tendency to like villains I couldn’t help myself but to be taken in by Pitch Black as well…
Apart from sympathy for his chosen colour I felt pity for him at the end of the movie. All he did was trying to regain the powers he had held centuries ago and that allowed him to be seen by people – and not just children. Of course his way was by far not the nicest – or even the cleverest – but he probably just didn’t knew what else he should do to change his demise. There are much scarier things in this world than the Bogeyman, but I’ll come to that later. What also made me like him more were rufftoons comics about his past that can be found in her gallery here. Incredible comics that partly show a different back story than the official one portrayed in special comics and other stuff from Dreamworks and of course the books by William Joyce (The Guardians of Childhood). 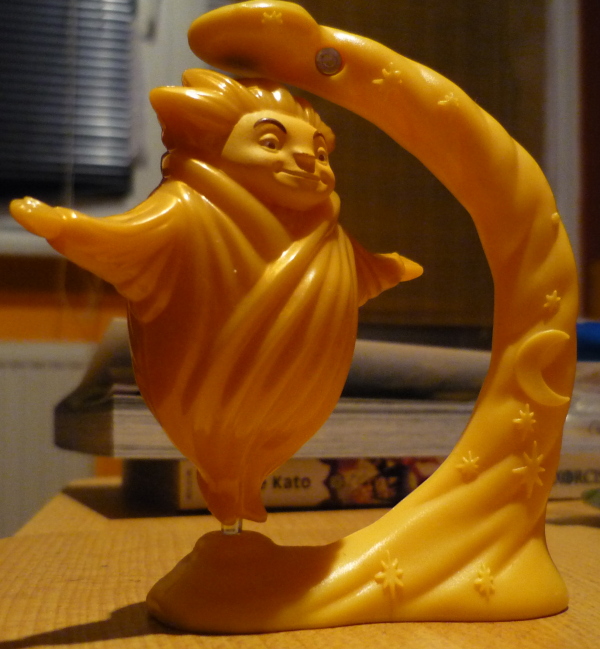 The Sandy-toy facing in a weird direction

After that I think it would be a tie between North with his weird jokes, the yetis and the elves, Bunnymund and his walking eggs and of course Sandy, though he might even be on par with Pitch. I even have the McDonalds figurine of Sandy standing/lying in my book shelf. 😀 (Eve got Bunny by the way). Though the magnet used to move him is weird. It always gets stuck when he is nearly facing the holding thing, but it’s a fun toy nonetheless. 🙂

Jack and Tooth, though I do not dislike them and they do have some nice scenes, are just a bit too plain to be among my favourites.

Among the kids I consider Cupcakes to be the funniest. Typical bully turned friend, but still fun, just as much as Monty, the kid with glasses, whose reactions were sometimes hilarious…. 😀

It is also great that you can see why the characters act the way they do. Common sense makes you understand the competitiveness between Bunny and North, Christmas is after all the much more celebrated holiday. But you also can understand why both Jack and Pitch strife for being believed in. I think it must be one of the worst feelings to see all these people around you and knowing that they cannot see you in return. It is already awful to be ignored as normal person, but as personification of an aspect of life (Fear, Frost) it must be even worse. At least in our cases others would bump into us, instead of walking right through you.

The Rise of the Guardians is a great movie. It has just the right amount of silliness and seriousness needed to portray an important message: Without belief in Wonders, without Hope, Dreams and good Memories there would only be Fear in children and children are our future that we must protect at all cost.
It also shows that even though children do not believe in the Bogeyman himself anymore, there is still enough Fear for him to still exist. Sure what people fear has greatly changed throughout mankind’s history, but it is still there and I could write a whole post about that alone – in fact I once wrote quite a long article about it, maybe I’ll translate it one day.

The movie has some really precious scenes and well portrayed characters.
Angry Sandy, not-believed in Easter Bunny, silly Elves and annoyed Yetis and all that wrapped in great animations (though a bit edged at times).
They also do well with playing with the viewers emotions.
When I first watched it, I didn’t really know what I should feel, when the scene moved on to the next big thing after the previous one had just happened.
You could argue that the movie therefore is a bit rushed, but I’d still say it was the pace needed to properly tell the story – even though the characters themselves did not really get time to process things or have much time for development, but you could say the movie portrays a war and you don’t really have much time in those either.

Regardless of the fact that it is a children’s movie does it have the potential and the ability to capture an older audience with its charms and jokes as well. Awws and laughter could also be heard from adults as much as from children, though not as loudly. 😉

Simply put: I really enjoyed the movie and I gladly bought the DVD, to watch it again whenever I feel like it. Even though some scenes don’t work as much as they used to during the first time watching, as you know what will happen later on. 😉
And I am curious about the books and comics accompanying it, but it’s always quite annoying to buy something in a different currency as I am not sure whether they are even available in Germany. But maybe will I get my hands on them anyway sometime. 🙂

For those who didn’t know: „Mare“ is an old word for a female horse, so Nightmare basically means Night-horse and do you remember what shape the Nightmares had? 😉 It is a bit more complicated than that, seeing that the word derives from a creature called „Nachtmahr“ in German that sometimes was portrayed in the shape of a horses head, but that’ll get too off-topic.

What also is too off-topic but what I still would like to add is a bit about my experiences with these characters/guardians in my childhood.
So you can look forward to that some time in the future. 😉

© Rights for the poster and the figurine belong to Dreamworks (the latter probably also to McDonalds).