is located in the Mecklenburger Schweiz (Mecklenburg Switzerland).

As I mentioned in the beginning of and throughout the Book-Week had I planned a trip with my Mum to a Book Hotel or more precisely the Gutshotel Groß Breesen that claims to be the first Book Hotel in Germany.

We had discussed a trip to this place for quite some time now, but this year my Mum got it from me for her birthday and in the end of July it was finally time to go there.

Getting there and the first impression

As we aren’t familiar with the region the hotel is located in, we used a satnav to find our way. Yet, even though mine has current map material, we struggled a bit towards the end.
The address of the hotel claims to be „near Zehna“ in a „Dorfstraße“ (Village Road) and my satnav was clever enough to send us into the Dorfstraße of Zehna…
Luckily it isn’t too far to Groß Breesen from there and we just needed a look at a printed map and were back on track.

Already when we entered the entrance hall we were met with the sight of up to twenty boxes, completely filled with books of all kinds. A sight that already let a grin spread across my face in anticipation of what lay ahead for us.

After we picked up our key card and found our room we had a look around, before settling in.

The room we had was a nice double-room that had already two books lying on the window sills. One by two pastors telling stories from their sheep and the another describing funny situations. I didn’t read either, but my Mum picked the comedic one. 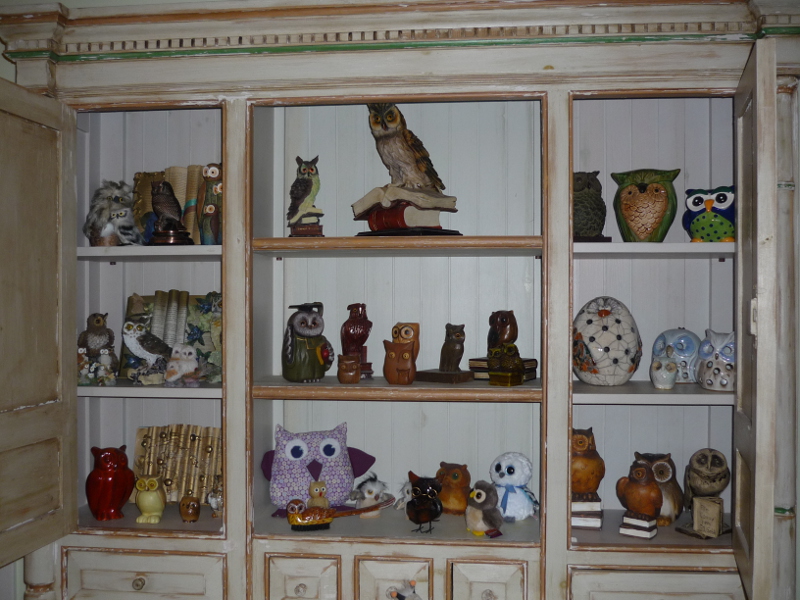 You could get jealous of all these owls in the hotel…

Just beside our room was the first library, but also three more shelves in the different hallways. In the library you had a couch and two armchairs to get comfortable in and if you wanted, you had also the possibility to listen to music from a player in the corner. Alternatively you could sit on the terrace right outside the room. We used the chance to sit there a couple of times in the evening and in the morning, before it got too warm/too cold out there and we moved to the garden or the arm chairs/our room respectively.

Next during our exploration we looked through the book boxes on our way to the vaulted cellar with the restaurant and already picked up a couple of interesting looking ones. We also discovered that there seem to be two more buildings containing the guest rooms and another, a bit larger, library in the cellar of one of them. Outside you had chairs and tables from the restaurant, but also many more possibilities to sit in the garden.

During our stay we enjoyed the awesomeness that was the restaurants food. It was always delicious, always an enormous amount of food and did I mention delicious?

Aside from that were there three things that stuck with me like the taste of the food:

During our first breakfast I had an encounter that I would have not expected to have. When I turned around from picking up a role (Brötchen 😉 ) I saw a man standing there that looked awfully familiar and he recognized me as well.
A hotel in the middle of Mecklenburg-Vorpommern isn’t really a place you expect to – or rather want to – meet a former professor/student…
At least my Mum was highly amused by this and I was surprised how much he remembered about me…

On our second evening we sat outside to have dinner and my Mum had ordered a bread-plate and as it was still warm the insects still flew around or more precisely: The wasps. They were pretty annoying, but it was really interesting to see one of them slowly cutting off a slice of meat from Mums cold cuts and fly off with it…

When we sat outside on Saturday the waitress came up to us, asking whether we knew English and were good at it, which I replied to with „I like to think so“. When she next asked if I’d be able to translate the menu, I told her that I’d try, but wouldn’t promise anything. Not long after this she brought me a tiny Langenscheidt dictionary, a pen and scribbling paper alongside the menu and I started working. With my own vocabulary, the dictionary and the waitresses mobile phone (aka Leo.org) we managed to translate the meals. If it hasn’t been changed then the translation of the menu is still by me. 🙂

Read where ever and when ever you want!

The best thing, however, was that no one judged the place you chose for reading. Or the time.
The hotel provides you with a variety of different chairs, benches and couches to get comfortable in/on, both in- and outside. Even when food or drinks were served they would make sure to place them were you could still read your book. Everyone passing by just gave you a smile, instead of the scowl you occasionally get elsewhere. The overall lovely and welcoming atmosphere was even more heightened by this. And just look at some of the places outside: 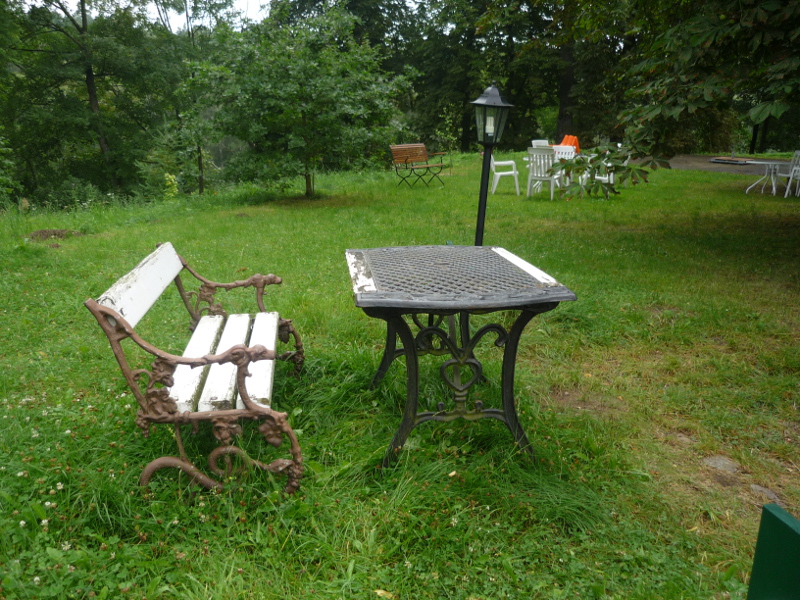 Benches, canvas chairs and many more 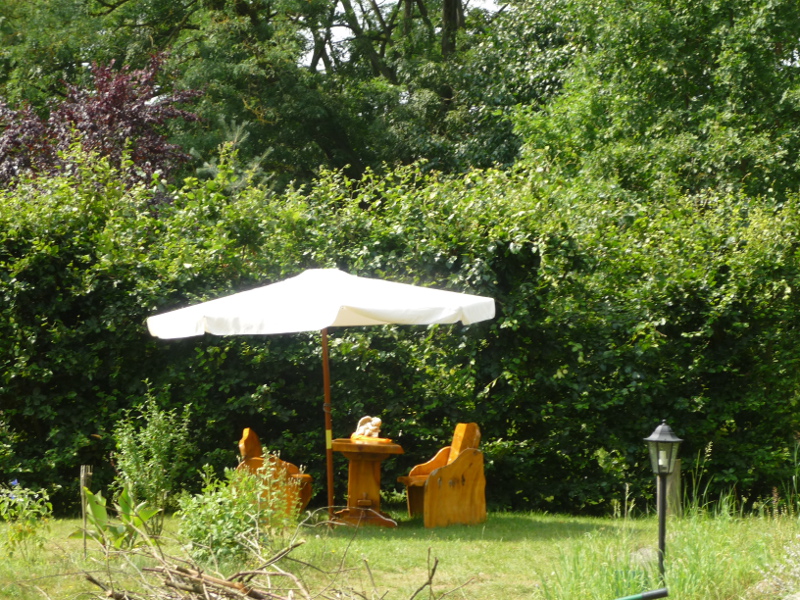 Who wouldn’t want to spent time with a good book there?

Everything in this hotel simply allows you to enjoy your reading experience just the way you want/like it.

Except, for example, a Mum that teases you with a „Still not finished?“ when she is done with her first book, while you’re still stuck with yours….thanks Mum…
To be fair did I pick a rather heavy piece with Jack London’s John Barleycorn and she had the comedic one I mentioned before.

Books as far as the eye can see

Even more impressive than the vast collection of sitting possibilities were the numbers of books you saw wherever you looked.

They lie in piles, in boxes or suitcases, on shelves in the different hallways, in the library room with the terrace or in the two rooms of the cellar library and a huge barn containing about 250.000 books alone…
Even though we had planned to take a look at the latter we were soon overwhelmed by the books we already had at our disposal, so we shelved (pun intended) that experience for our next visit.

This huge collection was brought there by the guests and other donors and will probably continue to grow and change as besides providing a place to stay and read, they also offer you this trade:

Leave two books with us and take one with you in return.

We have by the way left a couple of my Mums book just as well as Tiger Tiger and The Haunted Glass from the four that were initially intended to go there.

The thing I was wondering about most regarding the books I saw, was that there were barely any of the Fantasy genre, but I guess we Fantasy readers are simply too much like dragons and hoard our preciouses unwilling to give away any of our treasures (The Hobbit sends its regards for this metaphor…).
The book I did find was Earthsea by Ursula K. Le Guin where up until now I only knew its story from the movie version and I managed to read the first book (A Wizard of Earthsea) during our stay and picked this one to take with me when we left.

And even though there is now an English menu have I not seen that many English books, but a few are there. You just have to look a little longer or you bring your own and leave them there to enlarge their collection. Alternatively there might me more in the barn, but you’ll have to explore that one yourself. 😉

Simply put: This trip was an incredibly relaxing experience and both of us really enjoyed it. We already are looking forward to staying there or visiting again one day and I highly recommend it to anyone with an interest in books. You won’t regret it. 🙂

© I obviously don’t own the rights to the logo.