To get my mind off of my Bachelor’s thesis for a moment I’d like to just write up some stuff that’s been bugging me recently.
So basically this is just a rant post and you can skip it, more serious posts will be added when I can properly concentrate on them.
And nothing I’ll write down here is in any way meant as offence! It’s just me being annoyed and ranting.
Anyway, the end of my thesis is drawing near and at this point I am pretty much annoyed by the whole editing circle, that I just want the work to be over.
That annoyed that I even made a friggin sketched graph for it…with crappy arrows… 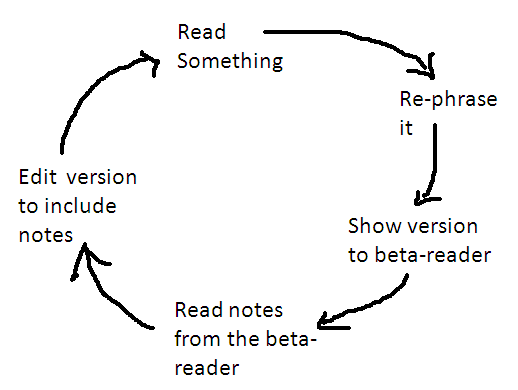 I know the notes I get are helpful and every re-work improves the thesis, but I really would like to finish the whole thing already…
I can’t help it though. The thesis gets into print on the 23rd and until then I’ll have to go through the circle a couple of more times.
It is supposed to be a proper thesis after all.
It annoys me that my old laptop died shortly before Christmas. Expensive machines shouldn’t be allowed to do that! The new one came just in time for my birthday, but Windows 8 is something I still have to get used to. And I still haven’t finished to properly set it up, as this and everything else is postponed until I’m finished with the thesis. And that still doesn’t change the fact that my notebook from work is one of the most annoying things I’ve ever worked with: slow, loud, old and evil. (It loves blue screens)
It annoys me that I am barely able to work on other writing related stuff right now.
Occasionally my mind drifts off to think about things I could write, but after hours of staring at letters on paper or on the screen I really don’t feel like adding more letters – let alone some in a different language.
This also includes writing this, as I am annoyed that I am writing this, but less annoyed as I can use it to rant and complain.
It annoys me that I can’t finish any of my drafts that I could have posted otherwise.
It annoys me that the last proper post I managed recently was posted nearly two weeks ago (It is however not unusual for me to take long breaks between posts, but still.) and was about a totally random Fandom problem, with a totally unnecessary analysis and fanfiction-like tale about characters being stuck in an elevator…
It annoys me even more that when I posted it on my newly created Tumblr-page, people were liking and re-blogging it, but many just saw the image and didn’t look for the actual content of the post. (Including re-posts with comments like „Someone should write that fanfic“ and „All hell would break lose„, which were both covered in the post.)
This however is partly my own fault as I cryptically described the fact that there was an analysis and a fanfiction-thing involved (Fixed that, but the wave of reblogs died down already, so no one really saw that…). Well, at least some of the Fandoms should have gotten it and a few found their way here from there…
Anyway, the post was still clicked at by a bunch of people (90 so far, to be precise) and the tale-version on fanfiction.net was also favourited, read and commented by some others. And followed, even though I said that it will not be continued. (Though some of them replied by saying they would like me to continue it….what strange ideas people have…)
So basically I am annoyed that people refuse to read properly.
But as I am doing this myself at times I can’t really blame anyone.
It also annoys me that I managed to write that ~4k post in less than a day and it took me several months to write my ~12k thesis…yes I know, research takes time away as well, but it’s still awful…
I’m also annoyed that there wasn’t any snow yet.
I don’t want it to be as horrible as in January 2010 and 2011, where the snow mountains on the motorway were twice the size of my car, but some snow to make it at least look like it’s winter would be nice.
On Christmas Day (24th) I sat in our living room and couldn’t see a thing on my screen, because the sun shown as brightly as if it was just a normal spring day. To emphasize that: Christmas Day felt like a day in spring!
It was snowing in Egypt, why can’t we have at least some of it here?
Though if the snow were to come I would probably complain about freezing and awful transport.
Whatever the weather does, it does it wrong…or we are just too picky.
It also annoys me that Christmas and New Years Eve didn’t really feel like either because of the high temperatures and my thesis was constantly at the back of my mind.
15 days in and I still don’t feel like we have a different year.
And apart from remembering that it is 2014 and not 2013 I now also have to remember a new number for my age…again….that is so annoying…Why can’t we just say our year of birth and people do the Math themselves? That’s what I have to do anyway when I’m asked how old I am…just can’t remember the flipping number…
Anyway, I kind of feel like I’m coming to an end with things that annoy me right now. At least I can’t think of more…
Well, this is kind of more than enough for a random rant…
I’m sorry to bother you with this, but I had to let off some steam.
If you like, you can share your annoyances as well.
I’ll gladly listen.
This way everybody can be annoyed. 😀
PoiSonPaiNter