Happy Bad Wolf Day everyone! 🙂
Or as happy as this day can be seeing what it is about.

But what is Bad Wolf Day?

Bad Wolf Day is a fan-celebration for the British television show Doctor Who.
In case you REALLY don’t know what that is:
Doctor Who centres around a time travelling alien being called The Doctor.
Usually The Doctor travels with one or more companions, mostly humans, to whom he shows the vastness of the universe. Their adventures are shown to the television audience since 1963 (with a break from 1989 until the reboot in 2005, plus a movie in 1996), this year having its 50th anniversary.
One of his many companions was Rose Tyler, a normal 19 year old girl from London 2005.

He meets her in his Ninth incarnation (he is a Time Lord, therefore he has the convenient ability to regenerate into a new body when he is about to die – which also is a good way to use different actors for a long running series 😉 ) and they develop quite a special bound based on trust and protective instincts.
Anyway – and this is kind of an Spoiler, but also the essence of what this day is based on – , during one of their adventures The Doctor is faced with quite a bad situation and sends Rose back to Earth to save her. Of course she does not want to stay there and wants to help him. She gains access to the energy of the TARDIS (his space-and-time vehicle; short for: Time And Relative Dimension In Space, a blue police box from the 60s that you might have seen somewhere before 😉 ) and flies it back to him.
Throughout their journey they had encountered the words „Bad Wolf“ several times and with this energy within her, she realizes it was her that put all those writings in all those places, as clues for herself, that she would realize that she is: the „Bad Wolf“ and that she would this time save The Doctor. Bad Wolf Day is a reminisce of that moment in the series.
The fans – the so called Whovians – are told to go out and write the words on slips of paper, on sidewalks, everywhere. Just to spread the words, to „help“ and so forth.

This year, and I found it through the Facebook Fan-Page: Doctor Who and the T.A.R.D.I.S., it is said to be today: 3. June 2013.  [Edit: I’ve added a different picture of the flyer as the FB-version is no longer available] (There is also the variation, that it is on the June 11th as that was the original date when the episode „Bad Wolf“ aired.)

And feeling a bit nerdy yesterday, made me not just write a bunch (well Eleven, as that is still his hour, I mean, current incarnation) of papers where I wrote the words Bad Wolf and the tag #badwolfday2013 on it, but I also wrote a little note on the back side where I asked to pass along the slip of paper and give me a note where they found it. Pictures of where I put the papers will be added to my FaceBook Page later today. [Edit: They are also added here: „Hiding“ Spots] 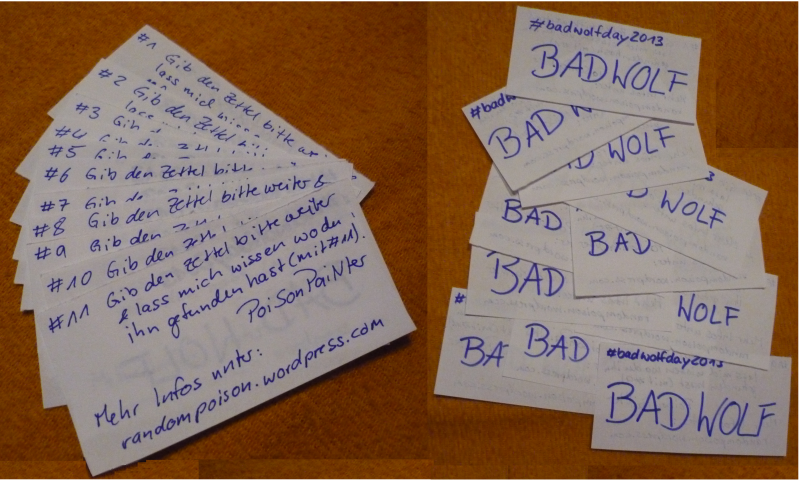 So, if you came here because you found one of my papers:
Please leave your note in the comments below or if you’ve even taken a picture of where you’ve found it, you can post it on my FaceBook Page (see the right side for the link).

And maybe, just for fun, I will do the same thing on June 11th again. 🙂