Some time ago ferngeweht made a Blog-Parade about the old children’s game „City, Country, River“ or „Stadt, Land, Fluss“ as it’s called in German and asked for 26 Bloggers to write articles about a city, country or river for a respective letter. This time around Sabine wants 78 Bloggers (3 for each letter) to do the same.
I already participated in a previous Blog-Parade of hers (Fernweh) where my post got added to the e-book version containing nearly all entries and also two others about travelling (Strangest Travelling experiences and Travelling Glitches). When I saw the first Parade I wanted to participate, but my chosen letter was already taken and my time/motivation back then wasn’t that good to begin with.
Not that this is any better this time around (*click*), but I decided to apply for the river version of the letter P.
And as you’ve already figured out: I managed to get it. 🙂

Additionally, this post also qualifies as first „Travelling T-Day„, a category I introduced when I talked about the schedule (I just don’t have a picture for it yet >_<).

So without further ado, let me tell you a bit about

The Peene is a river in North-East Germany; in Mecklenburg-Vorpommern (Mecklenburg-Western-Pomerania) to be more precise and if there weren’t those huge corn silos I’d be able to see it from our bath-/bedroom windows. So it’s obvious why I chose it, right? 😉

Anyway, as the Peene is a German river the pronunciation has nothing to do with the English „pee“ – even if the Slavic origin of the word (Pěna) – meaning „foam“ or „foaming river“ – could be associated with the word. If you go for a similar sounding word I’d recommend a look at „penny“. Here you simply stretch the sound of the e for the „ee“ and add the short one at the end. Easy, right? 😉

The Peene is a river system consisting of the Peene and other rivers that have Peene in their names (see picture) and several side-arms running towards or away from it. The Peene – that is actually only called Peene – I’m going to talk about origins near Gnoien and runs past Demmin, Jarmen (my home town that I’ll be using as an example throughout the post), Anklam and reaches the Baltic Sea as Peenestrom (strom = stream/river) in Peenemünde (münde being an abbreviation of Mündung, meaning „water mouth“) – at least that’s what I get from local knowledge and the quite confusing Wikipedia article.

This part of the Peene is about 126 km long, it’s longest distance is 185 km in total. The river is sometimes referred to as the Amazon of the North (Amazonas des Nordens) due to the curvy course of the river and its natural habitats of many different (sometimes endangered) species. 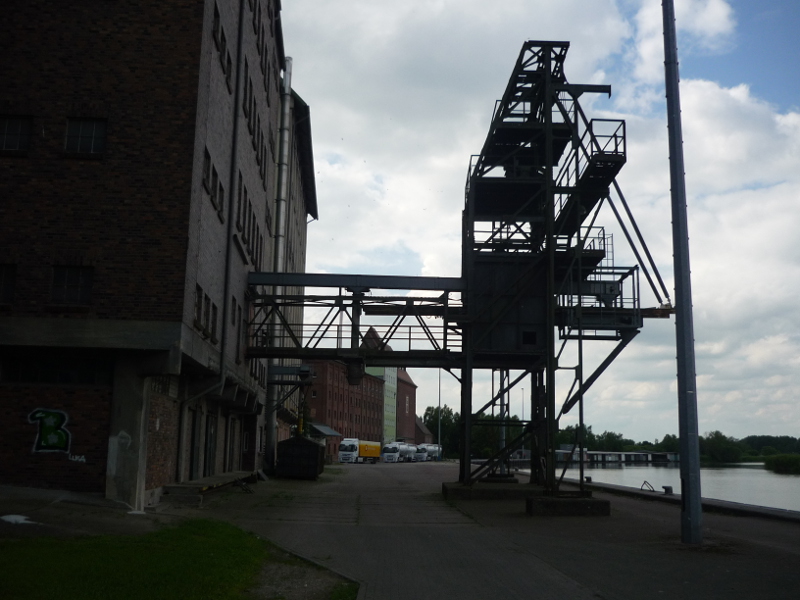 The mill & the filling construction

These natural habitats are often even sanctuaries, where beavers, (sea) eagles, otters and all kinds of little critters can live and re-populate. Some towns – like Demmin and Jarmen – even use the beavers for touristic advertisement (Jarmen recently got a wooden beaver statue at the town entrance). The habitats range from normal river valley (Peenetal 😉 ) to moors, with the moor even being the largest low-level moor (fen) (Niedermoor) in Middle Europe and other parts run through an Urstromtal.

Some parts of the Peene can be passed through on special river tours, where you can see these habitats. As the river(s) runs through a couple of lakes – like the Kummerower See – these tours are sometimes combined with tours there. Other parts are still used for shipping freight or (hobby) sailing, but pretty much every part can be accessed via canoe, with several stations along the way.
There are a few harbours along the Peene; in Jarmen there is the mill directly beside it and sometimes you can see the transport ships being filled from the mill and/or the tall silos that are blocking my/our view. ;)Obviously there are also a couple of bridges that are either high enough for boats to pass below or able to be drawn up.
Jarmen has two bridges: One for the (former Federal Road/Bundestraße B96) Country Road (Landstraße) L35 and one for the motorway (A20) directly alongside it. With an motorway entrance just outside of town it’s quite easy to cross the river here. The next proper bridges are, I believe, in Loitz and Anklam.

But that’s not all there is to it

The Peene also has a history of being a natural border within the state that is nowadays called Mecklenburg-Vorpommern, but used to be at least two different parts.
During the Swedish occupation of the North, for example, the Peene was basically the border in most parts between Swedish-Pomerania and New-Western-Pomerania. During that time a lot of towns alongside the Peene – like Jarmen – were under Swedish occupation. Later it cut off the Prussian region of Stralsund. Today the Peene is usually part of a county on both sides, but before we had the „Kreisgebietsreform“ (county area reform) where Jarmen became part of the new county called „Vorpommern-Greifswald“ the Peene used to be the border between the counties „Ostvorpommern“ and „Demmin„, if I remember correctly.

An especially interesting tale concerns the part of the Peene along the town of Anklam. Where the Brandenburger (or -ian?) and Swedish armies fought over the town and its access to the river.
In a bit more fictional way this plundering and destruction is composed as a theatre play called „Die Peene brennt“ (The Peene burns) and is performed every year around September and shows how the Anklamer drove off the occupiers. Unfortunately I never managed to attend one of the shows, but some day I certainly will. 😉

As I mentioned a couple of times now, do I live relatively close to the Peene. Growing up we met down there to just sit around and chat, to explore or to relax in the sun – if it wasn’t that time of the year where all the dead fish lay in the river after repopulating (Nearby we also used to have a large playground with a wooden ship where you could climb and play, but only the giant sand box it stood in now remains of it).

I made a few tours on the river – and I really like being on a river boat or ferry. One was in elementary school, that I mentioned briefly before, where a classmate described the animals we could possibly see as „Bibers“, „Adlers“ and „Otters“ (horrible plurals of Beaver, Eagle and Otter) and the other a trip as part of a birthday party from a friend of the family. Both were great and I don’t mind going on another trip.
If you live here it’s easy to come across different parts of the river, so it’s not surprising that I’ve seen it in at least Demmin and Anklam as well.

As I now mostly stay in Neubrandenburg I don’t have time that I could spent down at the river – and it would be weird because off all the anglers standing down there. Still I enjoyed going down there again to take the pictures for this post.

I hope you enjoyed this little introduction to the Amazon of the North and maybe you find yourself thinking about visiting it one day. 😉