Remember when I told you about the amazing female leads in two webcomics and dubbed it Chapter One? Well, seems like you’ll be getting a belated Prologue today, as one can’t start properly before talking about the beginning…
That and the fact that I really like Prologues….
Anyway, as I mentioned in the Introduction were Fred and Notfunny my „gate way“ into comics and Webcomics in general, but what really got me hooked on reading them was 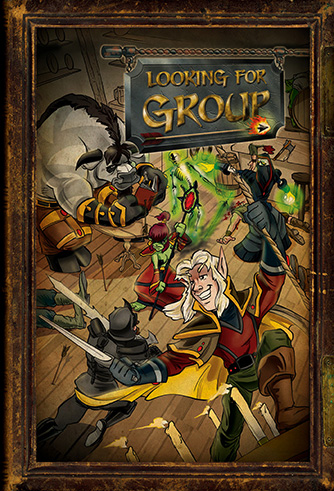 The webcomic by writer Ryan Sohmer and artist Lar (Lartist) Desouza tells the story of the elf Cale’anon (the one in the front) who just wants to be a hero, to do good, to help people, but is more often than not faced with decisions he wouldn’t naturally approve of. It’s not helping that the group he ends up travelling with includes the fourth wall breaking, easily bored, over-powered, homicidal and basically utterly ridiculous un-dead Warlock Richard (the one in the upper right corner), the witty and destructive priest Benn’joon (short Benny – in the middle with the staff), her Bloodrage father and scholar Krunch (on the left with the book), the crafty, bardic Dwarf Pella and bloodthirsty panther Sooba (both not depicted).
What makes this story fun is the clashing of these characters and their ways of solving problems. E.g. while Cale is still negotiating, Richard gets bored and just „FWOOSH“es the opposition (aka burns them to crisps with a – red – fire ball).
It basically started as run of the mill parody comic for the fantasy genre, gaming and pop culture in general (it’s filled with references: Lord of the Rings, World of Warcraft, Star Wars, Mary Poppins just to name a few) and turned into something way more epic in it’s own terms. For any new reader it’s a long way to go, but a worthy one.
When I first discovered it through a recommendation in The Forum I didn’t really give it much credit, the art was strange and the story was over the top, but the humour soon captured me – especially Richard’s, he’s so delightfully, well, Richard. The more I read the better art and story became until it reached the standard it has today. Sure there are still story lines that don’t really make sense and I’ve lost track of a lot of side stories by now (I believe I caught up when they were around book 15 and by now they’re in book 36), but I still return to the site whenever there is an update or I want to re-read something old.
Sure Cale is a typical main character, but there is so much thrown into his way that it’s fun again to watch his journey – especially the Archmage story line is incredible.
Sure there are times where the story just doesn’t seem to move on, but that’s a small price for what Sohmer & Lar offer their audience.
By now the universe expanded far beyond just Looking for Group, there are now also NPC stories, telling more about characters that only appeared briefly in the main arcs in tales drawn by different unknown/young/new artists and the Tiny Dick Adventures, where Richard comments on real life happenings – with a twist.
It’s fascinating to see the world that Sohmer created grow, see old story lines come back around and new ones starting. It’s the mix of the (bizarre) characters, the oddities and the seriousness beneath it all that makes this one special.
And Richard will certainly be amongst my favourite characters for a very long time (it is partly his fault that I keep naming characters Richard o.O).

I hope you enjoyed this little look into my first long-term-commitment Webcomic. 🙂
Have you read it?
Do you know others with similar themes?
Let me know in the comments below!
If any one is interested: I’ve been eyeing this thing and also been using a LFG wallpaper of Lil‘ Richard and The Bunny – that is seemingly no longer available except as cover art of book 4 – for years now.

PoiSonPaiNter
© For the picture lies with its creators. I merely used it as example of their work and hope that’s okay.