I’m going medieval this time, as I’d like to introduce  a series of events that take place throughout Germany every year. Their known under the name of „Mittelalterlich Phantasie Spectaculum“ (Medieval Phantasy Spectacle, MPS for short). They’re events that do not wish to show an authentic version of the Middle Ages, but a phantastic one (According to their own advertisement). 😉

And that is basically it.
You see people in medieval-like clothings (in German I would say „Gewandung“, but I haven’t found an English-equivalent for that word so far…), Orcs, Elves, Pirates and other stuff that is pretty much unlikely to have existed in that period of time.
Besides that you have all kinds of artists: Ranging from simple Jesters and fire-eaters (and variations of that), over people in beautiful and phantastic costumes performing incredible shows, up to all kind of different medieval bands.
Next to all the entertainment you also have the chance to buy more-or-less authentic clothings and supplies, like drinking horns, armour and what not.
On the festival-side you can even see how people might have lived back then in the camps of LARPer or even reenactment people – not sure which group they belong to, so to not offend any of them I give you both terms. It is quite interesting, though a bit creepy if you stand there and look at their camp sides. It’s kind of like standing in front of someone’s living room window and watching them.
By the way: The booths aren’t allowed to use electric lights, which is somewhat ridiculous seeing as it would help them in the dark. Yet it would also kind of ruin the atmosphere at night, when all kind of bonfires are lightened, but they seem to manage without functioning light bulbs. 🙂

This year I’ve been at two „MPS“ – as it is commonly shortened.
The first one was in Sierhagen [Edit: As it is no longer a station for the MPS I had to take out the link], which is in the north-east of Schleswig-Holstein. Beside going to that place for the first time it also was my first time camping at such an event, ,hough it wasn’t the medieval camp, but the mere tent-camp. Well, it was supposed to be one. We kind of used our cars as tents…*cough*
Anyway, in Sierhagen the area includes an old manor/castle-complex that gave the whole thing a different atmosphere than what you experience at the other one I was at. The whole manor-complex is surrounded by a moat and even a small lake as more or less natural defences. Going from the outside into the court and out towards the lime tree park you have to cross bridges, where you can follow the stream. Within the court were booths and the fool’s-stage. In the lime tree park they had booths, the smaller stage and the medieval camp. It was kind of beautiful. Just to see that again I would return to that place. Regardless of whom I might have to drag with me. XD 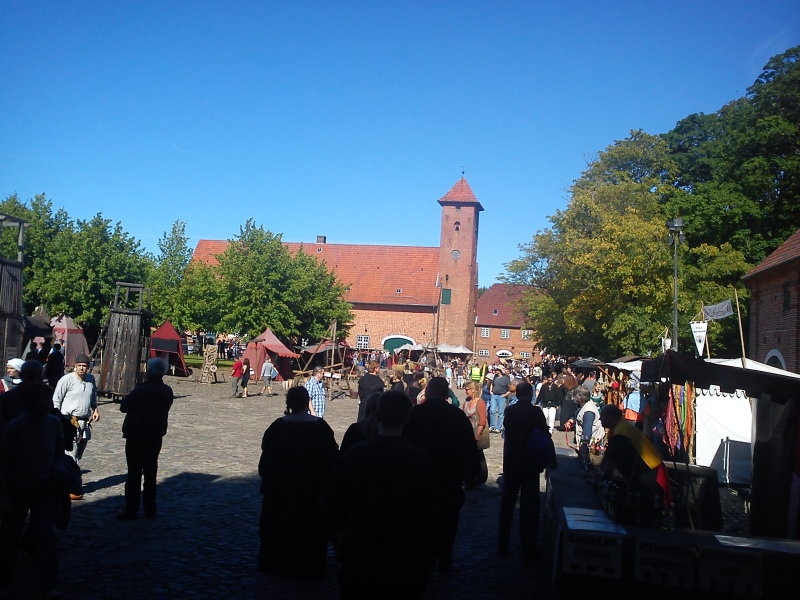 A look into the Court in Sierhagen

The guys I’ve been with this time were rather funny company. For example: Two of them bought an Ocarina and while one was quite capable of playing it right away, the other failed at it, horribly. I’m kind of curious whether they have played ever since…(and if they’ve improved). Interesting was also that we had eggs for breakfast. I mean „grilled“ eggs, like in: Putting a pan on the grill and putting (scrambled) eggs into it and then waiting for them to be ready. Or…I don’t know…far too many things to remember, let alone explain.
Concert-wise we looked into Faun – and decided they were too creepy – and watched the night shows of Rapalje and Saltatio Mortis.
The funniest thing about Rapalje probably was how the guys danced or clapped to it. That was more entertainment than what the band itself created.
Previous to watching Saltatio Mortis I talked with one of the guys about the song „Prometheus“ – a song that DarkFairy and I were looking for its interpreter, but couldn’t decide/remember whom it was. Unfortunately he didn’t knew either, but in the middle of the concert, we both realized: It’s one of SaMo’s most brilliant songs and DarkFairy and I forgot it, shame on us.
Beside the realization that the song was by them, it also became clear to me, that they simply are a band for small stages. DarkFairy and I have seen them on the amphitheatre stage of the Metalfest Loreley and that was quite a bad/boring concert, if I might say so…
The atmosphere they created on that small stage in Sierhagen was way better than the whole thing in St. Goarshausen. Remember: If you ever have the chance to see Saltatio Mortis live, make sure they play on a small stage! 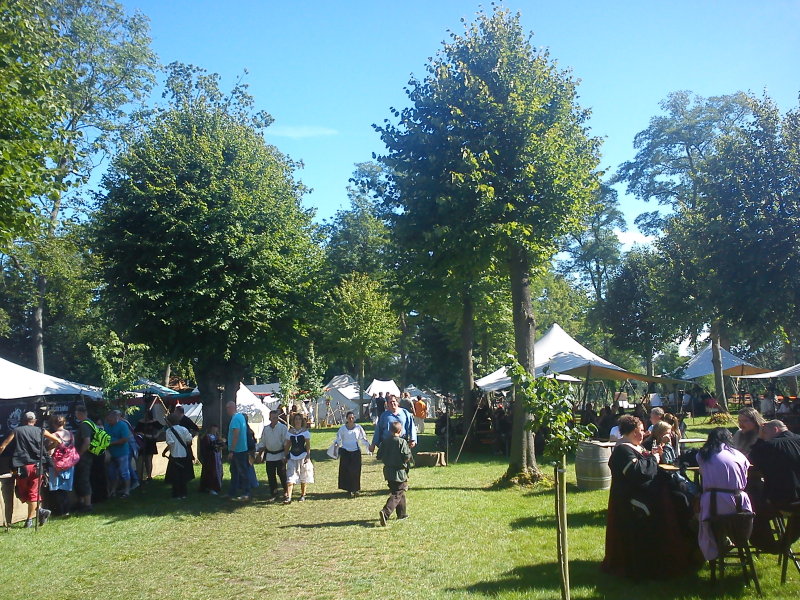 The lime tree park in Sierhagen

Still the best thing that happened in Sierhagen: The radio of my car got fixed! It now works like it should have from the beginning. It’s a good thing to have some capable people with you once in a while. 🙂
Oh and you can have a look at the official Gallery (click „Veranstaltungsrückblicke“, „2012“ and then „Sierhagen“).

So much green and many funny looking people…

The other MPS I was at this year was Hamburg – Öjendorf. That date had been in my schedule for almost a year beforehand. It was my second time there and a chance to see some people that I hadn’t seen for more than a month. It was great seeing them again, though I did not manage to meet all of them…
The area is within the Öjendorfer Park, so in difference to Sierhagen everything was on meadows instead of court-yards (Though Sierhagen includes meadows as well). And even if it isn’t too large, the thing you are doing the most, is calling each other to find the others location…
Surprisingly the first meeting I had went rather smoothly. My colleague told me were they sat and it didn’t take me too long to find them as I had parked pretty close to the entrance that was closest to their position. As I sat with them it didn’t take long till the next few people of the group walked by, coincidentally meeting us.
This MPS was funny and expensive….oh dear, it was…why, oh why did I listen to myself when I had the thought of finally getting my own „Gewandung“? I don’t regret it though and according to the people who saw it, it doesn’t look too shabby. (They used different words, but I’m more a friend of modesty. ;)) 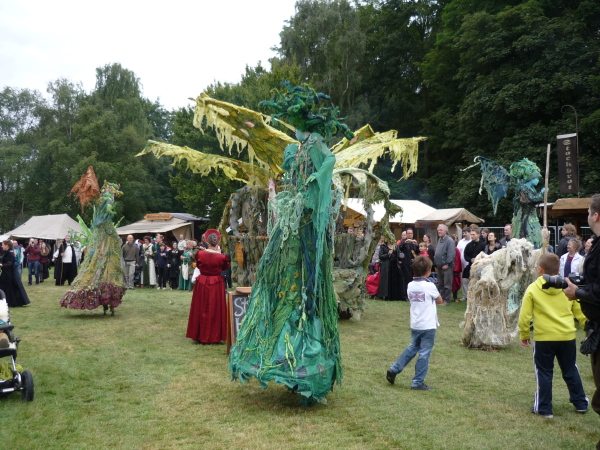 Regardless of that Öjendorf is quite a bit larger then Sierhagen, so you had some more attractions there. Like fire-shows, acrobats, a knight-tournament, more bands and more stages (four instead of „just“ two). The tournament is most fascinating as night-knight-tournament (couldn’t resist that one, sorry…). I’ve seen that last year and it was great. This year we saw it by daylight and it seemed a bit slow and somewhat annoying – especially the herald, but his role probably was made that way. Ok, I admit, I like fire, so riders with fire is like way more interesting than a „simple“ tournament to me. 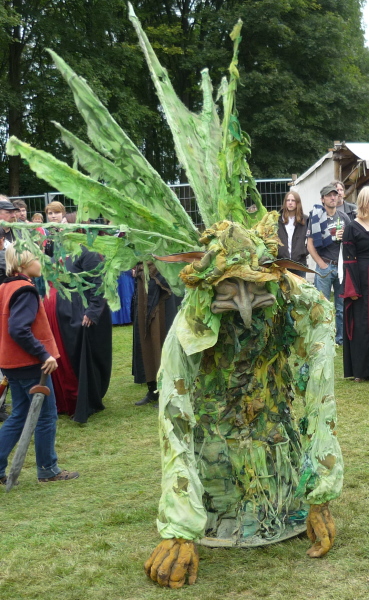 Afterwards IronEve – whom had accompanied me on my quest for clothes – and I headed back to the fire-spectacle stage for the evening concert of „Feuerschwanz„. A horde of perverts, but totally hilarious ones at that. When we arrived they just started playing „Hurra Hurra die Pest ist da“ (Hurray Hurray the Plague is here). A song about a village that gets the diagnosis plague and just drinks and parties away everything they got and do some pretty kinky things, only to realize the chaos after the predicted three days had passed. Simply too ridiculous to be taken serious., but fun nevertheless.
After that we picked up Eve’s chain amour for her Gimli costume, which she will be wearing at the premiere of „The Hobbit„. I don’t want to swap with her wearing that thing. Together with the axe and the helmet she should better start working out before she gets struck down by the weight…
When she rejoined with her boyfriend and their part of the group I departed to watch the fire show with a common pal of us and another colleague of mine. After catching up during the rather uneventful show they left for the night-tournament. I stayed to see the first few songs of that SaMo-night concert on my own before they returned to watch the rest of the concert. And yet again they did not play the „Drunken Sailor„… I was looking forward to that, but they did not do me the favour in both of their concerts… 🙁
However, that concludes my most interesting MPS experiences for this year.
I’m not sure which one(s) and with whom I’ll be attending next year, but I’d like to include at least one in my schedule. It’s fun (and I still need the other half of my clothings…) and always a great time and atmosphere.
I wouldn’t mind seeing some more of those.
PoiSonPaiNter