I’m on vacation and I give you the last instalment of Weltenwanderers and Schlunzenbüchers „Gemeinsam Lesen“ (Reading Together) for this year.

Each Tuesday one of them asks four questions, with the first three always being the same about the book one is currently reading and the fourth a new one by either of them. All questions below are obviously translated from today’s German post.

As I finished „A Game of Thrones“ by George R.R. Martin yesterday and didn’t want to continue with The Tombs of Atuan, by Ursula Le Guin, that I wrote about last Tuesday, I thought I might as well start with my childhood favourite for BiblioSmiles’s Summer Book Challenge, which is none other than Harry Potter and the Philosopher’s Stone by Joanne K. Rowling.
I’m currently on page 5, which technically is page one as I still haven’t started reading.

Mr. and Mrs. Dursley in the Privet Drive number four were proud of being well and truly normal, very proud indeed.

I’m quite excited to re-read this book again after nearly 15 years (if I remember correctly). In contrast to Game of Thrones 800+ pages it will be a short read with about 300 and I remember that I once managed to read through it in about a days‘ – or night’s – time.
I really hope I will still like the characters like I did when I grew up.

4. The end of the year is drawing near. Did you have any goals for reading this year? If so, which were they and did you manage to reach them yet or are you going to within the last few days of this year?

I put two challenges upon myself. On the one hand the Summer Book Challenge of BiblioSmiles (see link above) and on the other hand DarkFairy’s Alphabet Reading Challenge. Lo and behold, I managed to finish neither. 😀
While I’m slowly closing in on the eleven books from the Summer Challenge, I am currently thinking of replacing the majority of the books I had counted in Fairy’s challenge and therefore would have quite a bunch of letters left to choose books for.
Still, both challenges give me motivation to strive for actually reading the books I’ve chosen, even if I don’t manage them in the time frame they were set in.
As for my own goals: I didn’t really have any, I just wanted to read more and I’ve managed to do that. Though when I saw my statistic from Goodreads about how many books I’ve read this year, I do have the urge to complete the twenty now…
Maybe I’ll manage it. The Philosophers stone wont be a long read and there weren’t that many pages left in the Earthsea book either, so it might work…

You can obviously participate in these questions by either using my translated or the original German version.
This isn’t really book related, but as Unmei and I will be visiting the Harry Potter Exhibition in Cologne in January I thought it best to re-read it beforehand. 🙂
Leading up to our trip I will also host another Book-Week with reviews for the books I’ve read recently.
PoiSonPaiNter
© For the cover, the quote and the banner belong to their rightful owners.

Usually a review on [The EXTREMIS REVIEWS] is for a Comic Book volume, detailing what is happening and how the overall storyline is coming along. This one is instead about a TV series and also a bit different.

Supernatural by Eric Kripke is more or less a monster-of-the-week mystery drama show that started into its tenth season in the beginning of October. Because (nearly) every episode follows a certain pattern a proper review – episode by episode – would be rather redundant. Therefore I’ll give an overview of the storyline and a few important plot points so far, so that you will be well prepared for catching up.

The brothers Sam and Dean Winchester set off to find their father John, who hasn’t returned from a hunting trip. Though, unlike normal families the Winchesters do not hunt game, but monsters; especially an yellow eyed Demon that killed their mother by pinning her on the ceiling and burning her alive. While not able to defeat the Demon, the boys at least manage to meet up with their father. He tells them of a weapon – a Colt, whose bullets can kill Demons – which he wants to use on their mutual enemy. Playing cat and mouse with the fiend, the three of them end up badly injured, after a Demon-possessed driver sends his truck crashing into their Impala.

From this short storyline you can see that the first Season focused on gaining its footing and showing off the vast collection of monsters the two protagonists would be facing. The term monster-of-the-week-show can be used here as each week there is a different foe, with the big bad lurking in the background.
For the first time we meet Ghosts – or rather Vengeful Spirits -, Vampires, Werwolves and of course Demons and many others. Without much explanation as to the why and how, the ways to deal with these creatures are simply thrown at us:
A Ghost’s remains need to be salted and burned; Vampires have to be beheaded and Silver Bullets do the trick with the Big Bad Wolfs.
With the Colt there is also a way to get permanently rid of Demons, whereas exorcising them would send them simply back to Hell.

In this Season we are not only introduced to the key characters – Sam and Dean, and to some extent John and the yellow eyed Demon – but also to some of the key elements of the show.
As mentioned before is most notably the monster-of-the-week theme. While a (version of a) monster might return, it is rarely the same creature two weeks in a row. These encounters aren’t by chance, but instead sought out by the boys. In newspapers and other media they look for strange sightings or freak accidents and then dress up as police, FBI or whatever necessary to pursue their so-called cases.
We also learn about the Colt and John Winchesters Journal, the latter holding information about all the monsters he had encountered in his time.  Both items are frequently referred to or used after their first appearance.  The Journal even seems to be like a Wikipedia for everything monster-related as it provides an answer to all the questions the boys have whilst searching for a way to defeat their foes.
Another big topic besides the search for their father is the search for revenge. I have not mentioned this in the summary, but Sam’s reason for joining his brother wasn’t to find his/their father. He wanted to kill the Demon that not just took his mother, but in the pilot also took his girlfriend.  Driven by revenge he feels their cases to be bothersome instead of a good/the right thing to do for the people suffering from the monsters.
In this Season we see Dean as the boy/man who would follow his father’s words to the letter and Sam as the rebellious kid that rarely agrees with either of them.  Their arguments are petty and childish and don’t always seem genuinely motivated.

While it is unsatisfying that most of the plot is carried by dialogue of the brothers at the end of the episode – usually in or around the Impala -, it still isn’t that bad a reoccurring pattern. Though this is what makes it difficult to review it properly.
A plus point goes to the diverse range of monsters.
When I first watched the show during its original run on television (back in 2007), I was quite afflicted by it. A scene from the episode “Wendingo“, never left my memory. But when I re-watched it, it wasn’t as exciting any more. Though, I cannot tell if this was due to the show or my changed point of view. But I do believe it has a lot to do with the latter as seven years is quite some time (It would be ten if I had watched it on American television).
You need a magnifier to see the plot in this Season and the initial thrill of meeting new different monsters is soon replaced by the predictability of the episodes’ outcome. Still, it is an interesting concept, with some surprises and it has a finale cliff-hanger, where you simply want to know what happens next.
Rating: 3 out of 5
Until next time.
PoiSonPaiNter
Season Two: Supernatural Summary – Season 2
Originally posted on EXTREMIS REVIEWS: Carry On Our Wayward Sons: Supernatural Season One – The One In Which the Winchesters Become a Pair 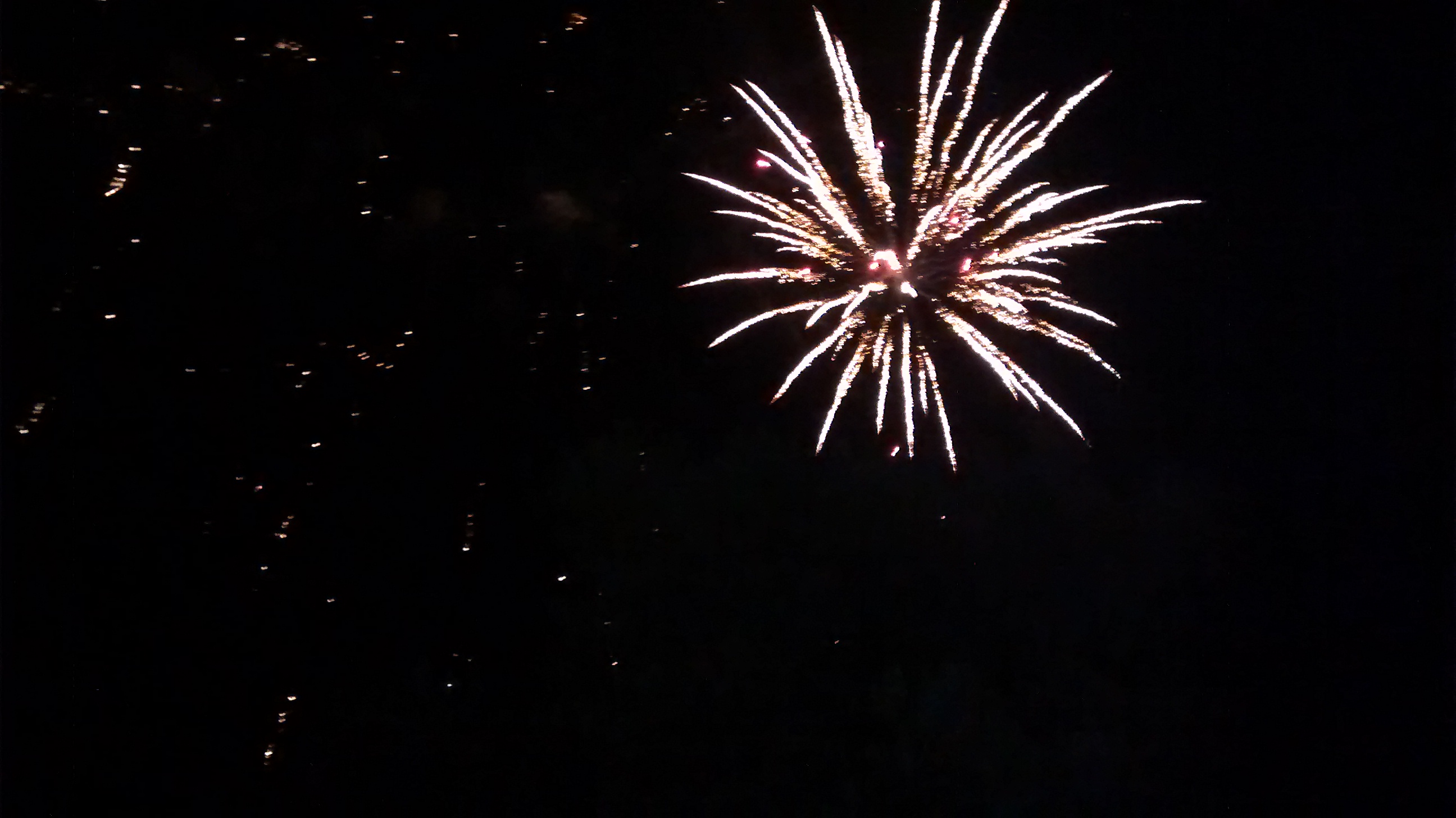 I hope you enjoyed the twenty third story.
I really like fireworks, especially those that are perfectly scheduled with music. But here in Germany you are only allowed to sent up fireworks when you have an allowance (for celebrations like weddings or big parties or fireworks events) or it is actually new years eve, but people usually start as soon as you can officially buy the stuff a couple days earlier.
PoiSonPaiNter
© For the story by me and for the picture by Anice. Do not use or repost either without my or her permission.