Some days ago a link was spread across social networks that advertised a game called „2048: Doctor Who Edition“ published on usvsth3m.com. The link was usually accompanied by a taunt „I reached the X*th Doctor! Can you beat me?“ (*X being the number of a Doctor).
I believe I do not need to repeat myself about what Doctor Who is, let me just tell you this: My natural curiosity of course got the better of me and I tried it myself.

What is the games‘ goal and how is it played?

The game gives you a four times four grid and two starting tiles with usually the lowest possible pattern.
The goal of this game – and its original versions, to which you can find links below the Doctor Who Edition – is to combine the tiles with similar patterns using your arrow keys to get up to the highest possible pattern.
In the DW case you combine the tiles with the pictures of each Doctor to reach the Eleventh, while in the normal 2048 you combine numbers to reach the eponymous number (don’t worry you follow the binary numbers starting with 2 and don’t go up from 1 to 2048).
But only the direct predecessor allows you to create a higher tile (Two First Doctors create a Second Doctor tile, two Second Doctors create a Third Doctor and so forth).

Are there any strategies involved?

As it is a kind of logic game there are of course many possible strategies.
I tried several things myself, like randomly moving the tiles around to make them fit, keeping everything on the left side or keeping everything on the right side.
But the one I used after repeatedly playing it for a couple of times was to try to keep the bottom line(s) more or less static and only work with shifting the tiles from left to right, after I established a line. Every time it could not be avoided to make  an up and down movement or a space was empty I would try to regain the static line again.
In these lines I would secure the higher Doctors and have the lines above them to create similar ones to upgrade the ones in the static line, while also filling spaces with lower tiles.

What was my own progress?

When I first saw the link to the game the poster claimed that he had only managed to get to the Eighth Doctor, so I took it upon myself to reach the Ninth. Surprisingly as I played without a proper strategy I did indeed manage to get up to Ten in the first try. (Using the strategy mentioned above my first try on 2048 got me to 1024)
Though as soon as I started thinking about the movement of the tiles as soon did I not manage to reclaim that small victory. After some more playing getting to the first Nine became more and more easy (I had the Seventh or even Eighth in a couple of moves) , up to the point where the second one would follow suit and create the first Ten.
Getting the second ten however was not an easy feat and it took me several more tries and probably a lot of luck to get it when the tiles even lay so perfectly that I could not just make the second Ten, but also combine them one final time: 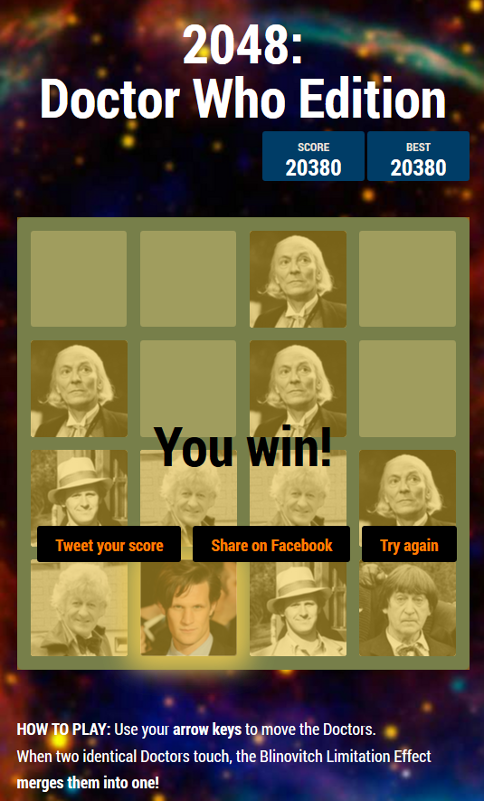 Prove that I beat the game! =)

Unfortunately you can’t continue to play after you made the final combination. I would have liked to try how far I would have managed to go with that game.

What did I learn from playing this game?

For one: This game is highly addictive. If you don’t reach your goal, you will try it time and time again until you’ve done it.
For another: Without creating some kind of strategy for yourself you will be hopelessly lost quite soon as the tiles pop up randomly and don’t give you that much of a chance to arrange them properly. (Mine is only an example, use whatever you think suits you best!)
At long last: I like that I managed to put up that strategy for myself. Moments like these give me hope that I am not too bad/stupid for my chosen profession as I still manage to make logical conclusions – just as I did with the buses on Thursday.

What are my other thoughts on the game?

I really liked how the pictures used for the Doctors were black and white until the Fifth and then turned into colour starting with the Sixth and his ridiculous coat. It kind of reminds you that the show has had it’s 50th anniversary last year. Though it was a bit unfortunate that they only took random out-of-character pictures for Eight, Ten and Eleven.
At some point you will even stop thinking about them as characters or people and more as numbers that you need to combine, at least that’s how it was for me.
It’s a fun and also strangely relaxing game, where you don’t really have to think that much after you’ve established your strategy.

If this gave you inspiration to try the game yourself or you have already tried it:

How well did you cope with the game? (Which Doctor did you reach?)
What was your strategy?
I’m curious about your replies. 🙂
PoiSonPaiNter
© For the game and the pictures used within it belong to their respective owners.