At the beginning of this month my flat got a new inhabitant. 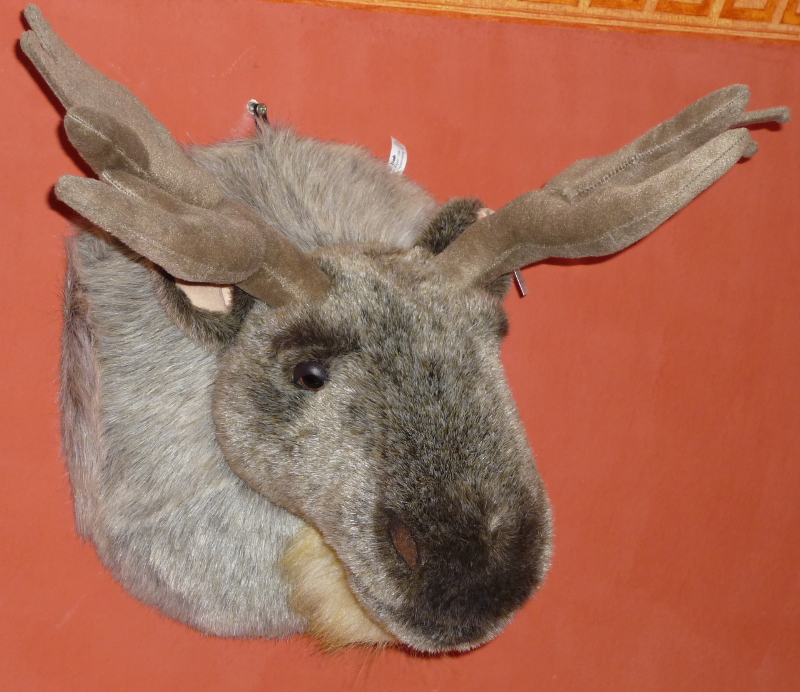 What is there to know about Karl?

He is absolutely fluffy.
He is a Moose.
And he was supposed to me a Pony with Horn.

But how did he get into my possession?

He was a birthday gift from Black Kat, Schnitzel and Anice.

Yet, his story is way more fun than that.

His story includes an inside-joke, a thought spoken out loud and a horrible pun.

But let’s start at the beginning …

At last years Wacken (which I still haven’t reviewed yet) the following scene played out:

DarkFairy and I were waiting for Rammstein to start, when she discovered a man with a strange drawing on his back.
Without warning she proceeded to point at him and partly yell: „Look! He has a … Pony with Horn! … Unicorn!“ („…“ are pauses 😉 )

When later that year Kat, Iron Eve and I were in Hamburg for the HellNights (that are also still waiting to be reviewed), we ended up in a shop for flat decorations.
In that shop we saw several fake trophy heads that looked pretty cool and were awfully fluffy. (They had a bison, a shark, a mammoth and others hanging at a wall and thrown into a bin.)
When we skimmed through the catalogue I discovered that they also had a unicorn-version of this.
Without second thought I then said something out loud that I probably shouldn’t have said:

„When I have a proper flat, I’ll get that unicorn-thing for my wall.“

What a bad idea that statement was, became clear throughout the evening of my birthday earlier this month.
When I arrived at our meeting point Kat handed me an enormous package that I was not allowed to open before the other two arrived.
This in turn caused a weird conversation with the barman of the pub we went to:

„Should I put the package away?“
„No, I still need to open it.“
„Oh, so you don’t know what’s inside? A proper present then.“

Through shaking the package I knew that something plush was inside. Though I expected it to be something different.
I also didn’t remember my statement from several months before.
So when I could finally open it, I didn’t understand the present, until Kat reminded me:

„You said, you wanted to get it when you have a proper flat, but I thought you shouldn’t wait that long. Before Christmas there were some Unicorns left, but afterwards it was hard to find anything. So we got you the Moose.“

And this is how Karl the Moose came into my possession and I’d say he is one of the most hilarious birthday presents I got so far.
They even thought about adding a paper-horn. 😀

When I couldn’t quite stop petting the poor thing (the artificial fur is really soft and fluffy…) Schnitzel gave the Moose its name:

„If you go on like this he will be bald („kahl„) soon. You should call him Karl to make it seem like he is supposed to be bald.“

In retrospective a quite fitting name.
As I had recently seen it again the name „Karl“ reminds me of a crow (I think) from an old adaptation of  „The Snow Queen“. (I was shortly tempted to call my new laptop that arrived on the same day „Klara“, because of the crows companion >_< )
The other Karl it reminds me of, as I just noticed, would be the one whose Latinized name is in discussion for becoming the name of the Nameless King in the book I’m co-writing.

What also is fun, is the English version of his name.
As I said: „kahl“ means „bald“, following the pun, the English name would be „Baldur“.
Which by the way is a name-variation for „Baldr“, the god from Norse mythology, whose story I mentioned in this post.
I think it’s funny how those things tend to connect if you look a bit closer …

Short version: I have a new flatmate. 😀
(That has nothing to do with the Moose from Supernatural)