A week after the 50th Anniversary Special of Doctor Who was aired I finally managed to complete my thoughts and this post about it.
I even have a couple of things to blame for that, here, let me show you the list:
#1 I am currently writing my Bacherlor’s thesis, so most of my spare time is used for doing anything but writing – or thinking in general.
#2 Face it: I do not post that regularly anyway, so two posts close to each other would just be weird for my standards. (Though I have done it in the past and I do plan to get some kind of schedule after this whole studying stuff is over).
#3 Everyone posted thoughts and reviews right away, so why should I be doing the same?
and
#4 The flipping special was so breathtakingly stunning that I simply did not know how to properly articulate my thoughts about it.
Does that justify waiting a week before writing this? I like to think it does. 🙂
And as it was nearly as long as a proper movie, I will use the same categories I use for those.
And I will use Spoilers, you have been warned.

What’s the special about? 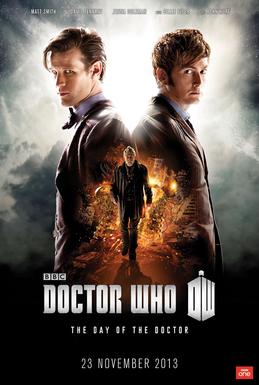 The Day of the Doctor official poster

In The Day of the Doctor we finally learn a bit more about the Time War that had haunted the Doctor since his return to the television screens in 2005.
In The Night of the Doctor we saw the Eighth Doctor regenerate into the War Doctor to fight in the Time War. When all seems lost he decides to use an old and powerful weapon to destroy Daleks and Timelords alike. But little does he know the weapon, the Moment, has developed a consciousness. In the form of his future companion Rose Tyler as the Bad Wolf it shows the War Doctor what he will become if he chooses to use the weapon. For this she opens windows in time that reach both the Tenth Doctor and the Eleventh.
Ten is seen with Queen Elizabeth I., a sub-plot that has been hinted at since (New-Who) season three in „The Shakespeare Code„, and accidentally gets engaged to her thinking she is a shape shifting alien, a Zygon, which she isn’t and ends up with two Queens when the window opens.
In more or less current day London Eleven had just invited his companion Clara to a new trip, but before they could start a UNIT (Unified Intelligence Taskforce) helicopter picked up the TARDIS and brings both of them to National Gallery to show him credentials of Queen Elizabeth I., which is a 3D painting of the fall of Acadia, the second city of Gallifrey, during the Time War, which we learn has two titles „No More“ and „Gallifrey Falls“. But he was summoned to actually look at paintings in the Under-Gallery that had been destroyed from the inside out. While looking at them his window opens and after some fez-throwing all three Doctors end up in Ten’s time line to figure out the plot with the Zygons and help the War Doctor end the Time War. With quite an unexpected conclusion in both cases.

Oh, I would have liked to see it in the cinema in 3D – even though I do not like 3D, as I have mentioned before – but the time and space factor wasn’t in my favour.
The nearest cinema that broadcasted the special is a 2 hours ride away from where I live, plus they did not allow tickets to be reserved, only purchased. Furthermore, I would have to drive there (and especially back) in the middle of the night on my own. No, sorry, as much as I was anticipating the special, that was not worth the trouble.
So, where did I watch it instead?
Well…through a BBC One Stream I fortunately found and with which I was quite satisfied as it only struggled for a few moments throughout the whole thing.
In conclusion I made myself comfortable behind my laptop and grinned like a bloody idiot at certain scenes.
As I mentioned before do I not know that much about the classic Doctor Who years, but even I could appreciate and enjoy the nods towards it. It must have been brilliant to experience all those funny and thrilling scenes, the plot twists and pretty much the whole thing together with everyone in the cinema. Even though I only saw it on my own I still had a great time.

The ones that impressed me the most were Billy Piper and John Hurt, as the Moment and the War Doctor respectively. The Rose-Tyler-Bad-Wolf-Moment was so much more than Rose on her own, so much more brilliant.  The War Doctor was unexpectedly funny and playful, dare I say adorable? Yes I dare: He was adorable.
My fear of not being able to see him as a Doctor version instead of the Dragon from Merlin was completely unneeded. He just so great was. (Please order the words according to grammatical correctness).
Ten was different to what we all were used to, sadder and even a bit tired, but seeing as his time line was closing in on „The End of Time“ it was reasonable. But David Tennant also looked a bit overworked in the interviews, so maybe he just didn’t have as much energy as he used to have. Which was quite contrary to the always quirky Eleven. I know I said, I never really connected to Matt Smith’s Doctor, but I still greatly enjoy his version of the Timelord.
But the most interesting thing was seeing those three Doctors interact, calling each other’s names („Sandshoes“, „Chinny“ and „Grandad“, just to name a few) and trying to figure out the two plots. And of course the brilliant revelation that they did not use the Moment, but instead used a technique usually used for paintings (as seen with the Zygons) to freeze Gallifrey. And for this all THIRTEEN Doctors (including the future incarnation played by Peter Capaldi, of whom me managed to see a hand and his eyes) teamed up to save the day. What a brilliant moment that was…all 13 TARDISes circling Gallifrey , all 13 being projected into the War Council room, all of them working together to save their home…
Still, they do not know if they actually managed to save the planet when they bid their farewells and returned to their respective time lines (in the process forgetting about it and still remembering it as having used the Moment to burn them).
When Eleven learns from a mysterious Curator (portrayed by the Fourth Doctor Tom Baker) that the title of the painting is actually „Gallifrey Falls No More“ and that their plan had succeeded he decides on a new journey, a journey to find Gallifrey, to go home „the long way round“ and we get to see all Doctors again, looking at Gallifrey. Really brilliant and proper conclusion for a 50th anniversary special.
As the Doctor was the main focus of the special other characters were pushed to the side a bit, but they nevertheless did a great job. The Queen and UNITs head of Scientific Research Kate Steward (the daughter of former companion Brigadier Alistair Lethbridge-Steward) did well in their roles as leader and impressed the Doctor(s) with what they were capable of. (The Tenth Doctor mistook the Queen twice for the Zygon and she even managed to kill the creature.) A little spotlight shone on Kate’s assistant Osgood, which was a pretty cool character. Some even say, she represented the Fandom, with her long scarf (akin to the one the Fourth Doctor wore) and the kind of hero-worshipping she had for the Doctor, even praying to him when a Zygon attacked her. But she wasn’t just a fangirl. She was a scientist, clever and the first to draw the conclusion that whatever came out of the paintings hid underneath blankets that had previously covered statues.
And of course you can’t forget Clara. She again pointed out the obvious to the Doctor(s). She saved them from being imprisoned in the Tower of London (through opening an unlocked door) and reminded them of what they swore when they became the Doctor. I really enjoy her, she is not as great as Donna, but she gives the Doctor a hard time as well. 🙂

I don’t know where I should start…this special was, as I had imagined, spectacular.
All those references to the old and new series were simply great. The opening screen, the  junkyard and the school from the very first episode (Even one of the Doctors first companions Ian Chesterton was mentioned on  a plate as Chairman of the Governors). Catchphrases of former Doctors and of course the appearance of all of them. It was a little sad that even though they showed how the War Doctor started to regenerate we couldn’t see the full regeneration into „my“ Doctor, the one that made me want to watch more of the show: Christopher Eccleston. But I respect his reasons for not wanting to be involved in the special. I also do understand why they only included Tom Baker – the longest serving Doctor – as the Curator and didn’t include the other three still living former Doctors (Peter Davison, Colin Baker and Sylvester McCoy). If you still want to see them I recommend to have a look at Davison’s: „The Five(ish) Doctors Reboot„, it’s hilarious…and it gives you a different look at a certain scene in the Under-Gallery. 😀
All in all a brilliant way to celebrate 50 years of this great show and I am clearly looking forward to finally seeing all those other great Doctors in their own stories…
Stuff I’d like to add
Apparently I was wrong in my earlier post about the Anniversary: The Special was broadcasted in 94 countries, not ~80. 🙂
And as you can see from my writing, I am still grinning like an idiot about all those great scenes and dialogues and stuff and will probably watch the special a couple more times. 😀
I hope you enjoyed it just as much as I did.
PoiSonPaiNter
P.S. This was my 42. post that more appropriately should have been about „The Hitchhiker’s Guide through the Galaxy„, but at least it was about a Sci-Fi show. 😉
© Rights for the poster belong to the BBC.