And part three of the Neubrandenwolf-Tale.
You can find all stories in proper order and some more information on this page: Neubrandenwolf.
Have fun with:

Pretty much the only thing that was real this time, was the fact that it had snowed again and that it’s not unusual to drive long distances to get home…
And the fact that we occasionally have wolf sightings in Meck-Pomm thanks to the packs we have in the Lübtheener Heide and other regions.
With the upcoming chapters this will be even less based on stuff like that and more on narration.
The question is though:

Should I wait for the next full moons to publish each chapter or just publish them as soon as I have them done?

What do you think?
Well, I hope you enjoyed this story as well.
Stay tuned for part three: Crow Moon! 😉
PoiSonPaiNter

I know there (again) has been a lack of content lately, but this time for a good reason: I’m busy writing stories!
But I’ll get to that a bit later, as today I’d like to talk about writing stuff in general and stuff I did more or less recently.
Two years ago the Bücherstadt Kurier published their March volume including my story „Nebeljagd“ (Mist Hunt). This was the first of my stories that has ever been published in a proper medium and not just on this Blog or on DF.PP Entertainment or in The Forum (back when it still existed 🙁 ).
I remember being so proud of this.
I remember calling my Mum right away after I received the mail with the amazing „You’ve been chosen“-line.
I remember printing out the story and showing it to her and the smile on her face.
I also remember what happened next.
For me those two things will forever be remembered together: My first success and my biggest loss.
Still, that didn’t keep me from continuing, I knew she would have (verbally) kicked my ass if I had dared to do that. Just giving up, wasn’t quite her style. 😉
It took me more than a month to at least be willing to write again, the result being „Ein neuer Tag“ (A New Day), starting there a lot of my writings involved darker tones about loss, flight and/or death.
Part of me used this to talk about my own experiences and thoughts, another part just found it fitting for a characters‘ journey. I believe a prime example of this is Mina’s side-story from my second Advent Calendar.
I’m fairly certain that „Der Weckruf“ (The Wake-up call) was the first story I published on a Blog after it all happened – in retrospective it’s quite a fitting title for the situation – not counting „Der Zufluchtsort“ (The Haven), which was the last story I finished the day before it happened and scheduled for the day after. Still, from there I kind of got back into things.
„Your Picture – A Story“ was (kind of still is, even if I didn’t manage to write anything for it these last couple of months…) a good outlet for me to just explore different topics and characters without going into too much details thanks to the word count. This was also where you could see the changes I mentioned earlier the most.
Another new step I made regarding my stories was/is attending a Lesebühne (Reading Stage) where I read them aloud in front of an audience (in a pub). It’s always a thrill to do that and I’m nervous time and again. Though there is rarely any feedback: A few people told me they enjoyed the stories, someone said the stories I read improved over time, another encouraged me to try my luck with a publisher, others had minor complains, but most of them said nothing. It’s still an interesting experience and with the amount of Short Stories I have yet to read (or write) I have quite some stuff still unknown to the listeners.
Speaking of trying my luck: I also managed to win Eve Estelles’s writing contest, twice, without actually expecting to do so: 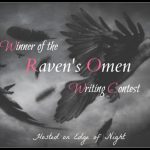 
With „The Raven’s Omen“ and the „Campfire Tale„, I impressed her enough to let me win and those two are also prime examples of my English Short Stories, as I usually tend to write those in German. The only downside to this is my pessimism coming into play here and telling me I only won, because (it feels like) there wasn’t much competition.
I am very pessimistic (in general and especially) when it comes to my stories, I like them, but I rarely think they’re good enough for anyone else to like them, so it came as quite a surprise when fruehstuecksflocke asked me to become a part of #Projekt24. With „Blind Date„, I hope I made an adequate addition to it. This project will soon be not just available on his Blog, but more on that when it’s officially announced. 😉
With my success here I also tried to add an entry to the Literary Advent Calendar of the Bücherstadt Kurier and some people quite laughed at my take on „The Crib„.
When this year began I told you about three stories I edited/translated for another project, namely: Ein neuer Tag, „The Quest for Ore“ and another one called „Verloren“ (Lost). These three are for Projekt Myra as exchange for some advertisement they did and as they still wanted/liked to get more I sat down to write out another of my organ-concert-ideas (see link Ein neuer Tag) concerning the Dwarfworld, I came up with back when writing The Quest for Ore and drafting Verloren. That story, however, did not want to be a Short Story and has by now roughly 30k of written out scenes and notes under the (working?) title: Der Wunsch der Königin (The Queen’s Wish). It’s still a lot of work to do and I’m still not entirely convinced it fits into the corner of Myra that we decided on – and again, that they really like what I’m writing-, but we’ll see once I’m done. Which I hopefully will be one day and don’t let it go to waste (like Michael’s story that I still haven’t managed to properly write down). Unfortunately I’m already kind of bored of writing out the notes and missing scenes, as motivation plays a rather huge part in my process and when the voice in the back of my head tells me something is not worth doing, then I have the tendency to listen to it, which is awful and counterproductive and absolutely annoying.
Another annoying thing is me jumping between ideas. As soon as one pops up I want to pursue it and everything else is then put aside (like writing this post, when I should be doing something else 😉 ). One of the last times this happened I had nearly/finally finished with last years Advent Calendar and then I somehow decided to write two more stories. The first one was the Christmas story „Santa’s Helper“ that I kind of feel like continuing in this year’s Calendar, though I’m not sure if I really should – any thoughts?
The other was „Winter Moon“ that I did get carried away with and which now has the basics for the twelfth chapters I speculate to write under the working title „Neubrandenwolf„. Though I still don’t know whether I should publish a Chapter a month (close to the full moon) or just publish as soon as I’m finished, Twitter wasn’t helpful for that decision…
The idea-jumps doesn’t make it any easier to get anything done though, quite the contrary. They are especially awful when it comes to the Fanfictions I started over the years that are still not finished yet, especially as I kind of took a year long break from them. Though I did manage to update 3/4 stories by now, even if updating one of the stories was recently postponed by writing the first ~7k version of The Queens Wish and then finished after I dreamed about one of the characters pulling me towards him…
Still, they’re a great medium where you technically don’t have to think up that much regarding the worlds you write in and just can explore different story lines with existing characters. Which doesn’t mean I did not think things through, because that would be impossible for me, as I want things to make sense, even if that makes things more complicated and nearly as bad, as if I thought up my own worlds.
Anyway, a few people keep telling me I have a talent for writing and that I should try sending stuff to a publisher, but the voice in the back of my head, still tells me that I’m not good enough, that the stuff I write is too full of clichés, too boring, too simple and that no one would want/like to read it anyway (hence the lack of motivation at times). I really don’t know whom I should listen to, but that doesn’t mean I won’t keep writing – and potentially improving. All this stuff has to get out of my head somehow. There are still too many stories left untold that I don’t even dare to think about to not get distracted by them…
But don’t worry, you will get a few things to read in the future – whether you like them or not. 😉
PoiSonPaiNter
P.S. Still not any better at naming things. 😉