Today you get a review for one of my childhood favourites for BiblioSmiles Summer Book Challenge. Especially as today I am at the Harry Potter Exhibition in Cologne with Unmei. 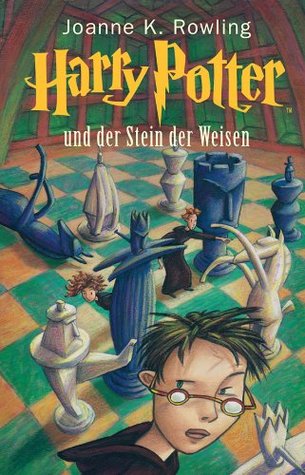 The young orphan Harry Potter leads a normal life with the Dursleys: his aunt Petunia, his uncle Vernon and cousin Dudley. That is until a strange letter arrives that is accurately addressed at Harry, regardless of where he currently is.
On his eleventh birthday Rubeus Hagrid finally hands him the letter telling Harry that he is, in fact, a wizard. Confronted with the truth about his parents and himself, he soon learns about his fame as The Boy Who Lived and sets off to his first school year in the Hogwarts School of Wizardry and Witchcraft. There, for the first time, he gains friends (Ron Weasley, Hermoine Granger)- and foes (Draco Malfoy, Severus Snape) alike – and together they uncover a secret hidden within the school.

When I was about the same age as Harry and the others I read this book several times, I do believe at least seven times. Re-reading it after all these years I looked a bit different at the writing itself though.
I still knew what happened in each chapter by simply reading the title, still I didn’t remember the exact words that were used. This kept the whole thing exciting and still captivating whenever it was interesting.
The writing style did, however, feel like it was indeed intended for young people. It didn’t bother me much though (it was a nice and welcome change from the complexity of A Game of Thrones). I do believe the later books are written a bit differently, but as a series continues, so does an author improve and I wouldn’t be surprised if there really is a change. Like always I can only make my assumptions from the German versions of the book(s).

I grew up with Harry, Ron, Hermoine (though the latter was spelled Hermine) and Neville and have lived through their trials. Even after all this time I think Harry can be quite a brat sometimes, just as Ron can be quite idiotic, Neville was always quite underrated and Hermoine was – and still is – my hero.
As I have mentioned before am I not a fan of „you/I-have-to-do-this-because-you’re/I’m-the-main-character“- story lines and each book pretty much follows the same principle. The highlight is when the others get involved. Here they are still getting to know each other and the exploring-together part is quite left out and instead we see them butt heads. I never liked it when the boys talked down Hermoine or rid themselves of Neville. I like(d) those two and wanted to see more of them. Ron’s sometimes unwanted stupidity still made him likeable.
When I first read the book I think I was as shocked by the twist at the end, as the characters themselves, but when I re-read it with that knowledge, I saw the hints that are already there and that’s what keeps a story interesting.
Some characters feel like stereotypes, many are named, but not explored, but still, no two characters are the same – well, maybe with the exception of the Weasley-twins. 😀 I never understood why anyone would badmouth the Weasley’s, they are an awesome family…
Regardless of that am I just time and again surprised how soon Muggle-born or Halfbloods forget the technological advantages of their home. Sure Computers weren’t nearly as good back in the early 90s as they are nowadays and many things couldn’t be found with the help of the Internet, but still it’s weird that the Magical community does not show any kind of interest in it…

I don’t know what I can say here.
I really liked the book when I grew up, I desperately waited for my letter for Hogwarts and I still enjoy exploring the world after all these years.
The book might not be a masterpiece – some story lines jump quite a bit, some things could have been covered more, stereotypical characters – but it is one of those books that I will probably always enjoy reading. It makes you want to join this magical world, just like Harry – without the whole Boy Who Lived baggage though – who was allowed to part from a mundane life and experience all that.
Every kid should have the chance to read this book while growing up.

If some of the things above sounded familiar than that’s because I mentioned some of it already in these Reading Together: #6 and #7
PoiSonPaiNter
© For the cover belongs to its rightful owner